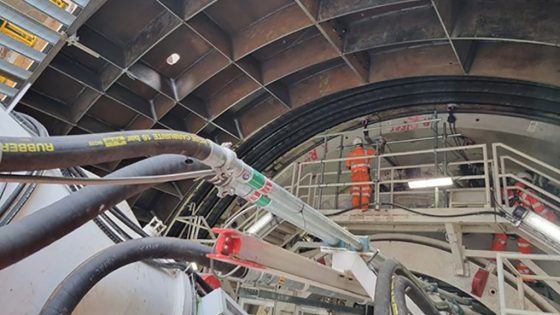 Work on the cross-river tunnel, which will stretch 1.4km, connecting Newham and Greenwich Peninsula in the east of the capital, is being carried out by the Riverlinx Consortium.

The group features Bam PPP PGGM, which is a partnership between Bam, Dutch pension-fund administrator PGGM and Ferrovial subsidiary Cintra.

Construction work on the project, which is costing almost £2bn, began in 2020 and has been gearing up for the tunnelling phase. The two bores that make up the Silvertown Tunnel are being built using one 82-metre-long tunnel-boring machine named ‘Jill’, which honours Jill Viner, the first female bus driver in London.

The machine will move 10 metres per day to finish the first tunnel before it is turned around to bore the second, which runs back towards Newham.

A conveyor system has also been put in place, which removes excavated material while repairing the river wall to protect it from damage during the tunnelling. A total of 600,000 tonnes of material is expected to be excavated during the works.

Work to realign the road network in Newham and Greenwich to link in with the new tunnel will take place at the same time as the boring, and designs for the walking, cycling and landscaping improvements are now being devised.

TfL’s head of the Silvertown Tunnel programme, Helen Wright, said the start of tunnelling was “a huge step forward”.

Riverlinx CJV project director Juan Angel Martinez said: “I’m very proud of everything this project and our team is delivering, knowing how important it is to us and our supply chain to deliver the programme safely and responsibly, providing sustainable opportunities, career growth and benefits to the local communities and our people.”

Last June, TfL reached a £10m settlement with a different consortium that was initially named as the preferred bidder to build the tunnel.

On completion, it is expected that the tunnel will cut down congestion for cars, buses and lorries driving across east London. However, the project has been controversial due to its high cost.

Prev Next 1 of 968
Subscribe to our newsletter
Sign up here to get the latest news, updates and special offers delivered directly to your inbox.
Popular Topics