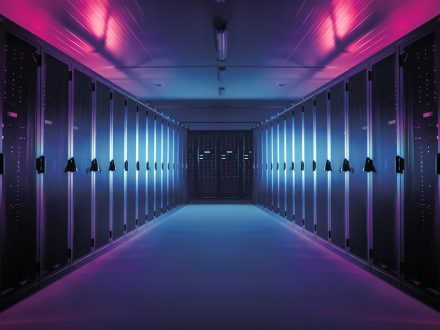 With demand for data-centre capacity set to increase tenfold between 2018 and 2025, opportunities abound for contractors – whether it’s building new sites or upgrading existing facilities. James Wilmore looks at the potential and the challenges

Many of the shifts in behaviour triggered by the pandemic have brought data centres to the fore. Whenever people browse the web, shop online, stream media, communicate by video or use social media, all of the internet traffic they generate has to be processed and directed by armies of computers, all beavering away in the racks of data centres (DCs).

The dramatic surge in the use of digital services over the past two years means that demand for DC capacity has never been so great. Since 2010, the number of internet users has doubled worldwide, according to the International Energy Agency, and a recent report by research aggregator DataReportal pegs the current global internet user base at 4.95bn people.

Meanwhile, the number of active social media users has jumped by 10 per cent year-on-year to 4.62 bn. And consulting firm Aecom predicts that by 2025, data usage will be 10 times higher than in 2018.

Given these patterns of growth, it is not surprising to learn that the global construction pipeline for DCs hit a new high in 2021, according to a report published in March by property services firm JLL, although it also notes that delivery of many projects was hit by supply-chain disruption and other delays linked to the pandemic.

Much of the growth has been concentrated in the US. In Europe, by contrast, the DC construction pipeline actually declined. The scale of these specialised projects is measured in megawatts – corresponding to the peak power consumed by the racks of servers in operation – and Europe’s pipeline fell from 418MW at the end of 2020 to 275MW a year later.

A similar pattern can be seen in the UK. London had 118MW under construction at the end of 2020, but only 50MW at the end of 2021. Nevertheless, the market is expanding, with 110MW of capacity added in London last year, according to the JLL report. And a study by consulting firm Turner & Townsend predicts that data-centre construction demand in the UK will be greater in 2022 than in 2021.

“We’re not going to bid on every single opportunity that’s out there. We’re trying to be strategic and sensible”

Contractors are upbeat about the scale of future opportunities. Philip Cruise, data centre pre-construction manager at contractor John Sisk & Son, says the growth he is seeing is “unprecedented” and demand is as “healthy as it has ever been”. Sisk has been tackling data-centre projects for two decades and in recent years it has branched out from its core focus on Dublin to the Nordics, including Sweden, Finland and Denmark, where the ambient temperatures help with the need to keep busy computers cool.

Despite the scale of the opportunity, Sisk is wary of overcommitting itself. “We’re not going to bid on every single opportunity that’s out there,” says Cruise. “We’re trying to be strategic and sensible, so we’re not making promises that we can’t deliver on.” 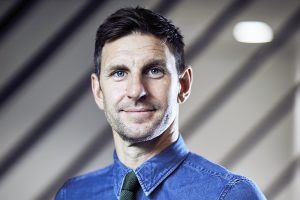 ISG is another big player in the data-centre construction space, having delivered projects totalling about £3bn in value over the past decade. “Demand for data centres is increasing across multiple customers,” says ISG’s managing director of data centres, Warren Pickance. “We’re growing significantly in our core customer base – well-known customers, as well as newcomers.”

Like Sisk, though, ISG is taking a cautious approach to bidding. “We’re being more selective to make sure this growth is sustained and agile, so we can continue to deliver,” Pickance says.

“We’re growing significantly in our core customer base – well-known customers, as well as newcomers”

While well-known e-commerce brands make up a big part of the market for DCs, there are a host of smaller co-location operators – or colos – such as Equinix, which rent out space to third parties.

Contractor Skanska has worked in the DC space for 12 years, building, fitting out and upgrading facilities, and says it is seeing strong growth in colo projects.

Skanska executive vice-president Katy Dowding says: “This is where you’re really starting to see the growth happen, as organisations looking to get economies of scale come together. As commercial models develop, it will become easier for them to co-locate.”

Centres with an ‘edge’

While the traditional view of the DC market is of vast hangar-like buildings, opportunities are emerging to deliver smaller facilities closer to end-user demand. These are known as ‘edge’ data centres. However, while the edge concept has triggered plenty of debate over the past five years, a significant construction pipeline of this work has yet to emerge. 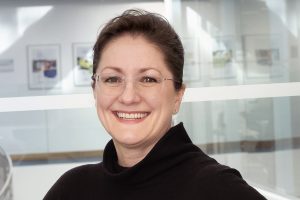 Pickance says: “We haven’t seen a huge amount of [edge] opportunities as yet,” although he predicts that demand may take off over the next two to three years, as banks, in particular, look to improve their online offerings.

Dom Puch, UK data centre lead at Turner & Townsend, also thinks demand for edge centres will ramp up, although he cites 5G mobile technology as the driving force. “Most new phones are now 5G compatible, which will enable much faster communication, but will mean you will need to be closer to a server,” he says.

“These opportunities come to the market quickly, so you’ve got to be able to respond”

Scotland, meanwhile, could become a location for data-centre operators. Dowding explains: “If you look at where sources of power are coming from, you have offshore wind in Scotland. You’ve also got the benefit of cooler temperatures there, which helps with carbon efficiency. It’s an area of the market we’re watching.”

Puch says that away from the “hallowed ground” of London and the surrounding area, other hubs are already starting to emerge. South Wales is one, where Microsoft is reportedly planning a data centre on the site of a former radiator factory in Newport.

Others are less convinced that relatively remote locations will prosper. “There are constraints on [the] network and you still need to be close to a main campus, like London, Amsterdam, Frankfurt or Dublin,” says Cruise. “You still need the network infrastructure to bring you back to a main facility.” 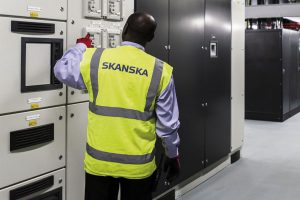 Aside from simply building new sites, there is also an opportunity to retrofit and upgrade existing facilities in a market where the underlying computer technology is constantly advancing.

Dowding says the challenge is to “remodel the building to add greater capability within the same space”.

Puch agrees: “There is definitely an opportunity in replacing old, inefficient kit with high-performing kit.”

Once a contract is secured, either on a new build or retrofit, how does delivery play out? “These opportunities come to the market quickly, so you’ve got to be able to respond,” says Dowding. And, once work begins, it’s not for the faint-hearted.

“The projects are very fast,” says Pickance. “From securing a project to a pre-construction period to delivery can be two years. It’s a very demanding sector, but enjoyable as there’s lots of technological advance that you’re part of.”

Clearly, there are plenty of opportunities in this exciting, fast-paced sector, but what are the stumbling blocks? For contractors, top of the list is securing the workforce to fulfil new jobs.

Cruise says Sisk has enough talent to deal with its current requirements, but he adds: “To hire staff for new projects is very difficult. Demand is so high [that] it’s very difficult to secure people as they’ll know they’ll get a better offer somewhere else. Salaries are being driven to an unsustainable level. We see a lot of people who are happy to work anywhere across Europe, from project to project, and they’re not really interested in company loyalty. It’s the hardest challenge that we have.”

“Even before [the] Ukraine [war], we were already seeing quite large fluctuations in steel pricing”

Pickance says ISG is looking outside of the immediate data-centre sector to recruit talent, such as people who have worked on power stations or defence projects. “We’ve recruited quite heavily from those sectors,” he says.

But, as Cruise points out: “If every project was to become a reality that’s out there, there certainly wouldn’t be enough resources to deliver them.”

As with other parts of construction, material supplies are an issue. In Turner & Townsend’s data-centre cost index survey, 87 per cent of respondents reported that material shortages were causing delays and cost escalations. The problems have been caused by Brexit, COVID-19 and now the war in Ukraine.

Steel is a particular cause for concern. “Even before [the] Ukraine [war], we were already seeing quite large fluctuations in steel pricing,” says Puch.

Dowding adds: “Without a doubt, we’re seeing an increased lead-in on some key equipment, [such as] generators and switchgear.” The sector has also been affected by the global shortage in semiconductors.

However, by far the biggest challenge that looms over the DC sector is how to deal with the environmental impact and the resulting political fallout. According to the International Energy Agency’s 2021 report, data centres account for about 1 per cent of global electricity demand and contribute up to 0.3 per cent of all global CO2 emissions.

As Turner & Townsend noted in its most recent cost index survey: “The climate crisis continues to worsen and these resource-hungry facilities are facing growing pressure to change. The regulatory landscape around net zero is creating new risks, coupled with growing client and consumer expectations.” 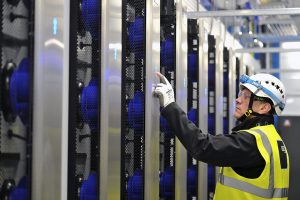 The amount of power and resources consumed by data centres comes not only from the power needed to run the servers, but also from the air conditioning required to deal with their heat output. Technology giants are well aware of the potential consumer backlash, and they have made commitments to reduce their carbon footprint. Google, Microsoft and Equinix have signed up to the Climate Neutral Data Centre Pact.

However, these concerns may also have an impact on the DC construction pipeline. Last month, it emerged that Facebook parent company Meta had reportedly shelved plans for a new 166ha data centre in the Netherlands, following political opposition and objections from environmental campaigners. Apple has also become embroiled in a long-running battle to get an €850m (£709m) facility built in Galway, Ireland.

“It’s a difficult conversation with regard to the carbon footprint of these facilities,” admits Cruise. “There’s been a lot of bad press around data centres, and I think there’s a lot of incorrect data out there with regard to energy consumption. Everybody needs to be educated about why we need data, and how these companies are working to make the construction and operation of these facilities more environmentally friendly.”

Puch believes a “tipping point” could be reached where servers become too big in their energy requirements. “To deal with that requires innovation,” he says. “This will need to be from nose to tail – from how we operate them to how we cool them, and how we provide resilience.” 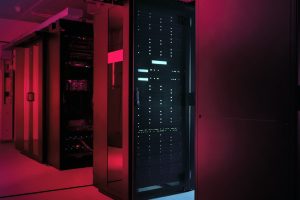 A final, big challenge is the scarcity of land. “London has experienced record-level price increases throughout the pandemic,” according to JLL’s latest report on data centres.

Despite these challenges, contractors are positive about the prospects for the sector. “We don’t see any slowdown in growth over the next five to seven years,” says Cruise. “The demand for cloud services is really driving the demand for data centres.” ISG also anticipates further growth across Europe, in Paris, Amsterdam and Frankfurt. There is plenty for contractors to tackle. “Just don’t overcommit,” he warns. “There’s a lot of pressure on time and cost.”