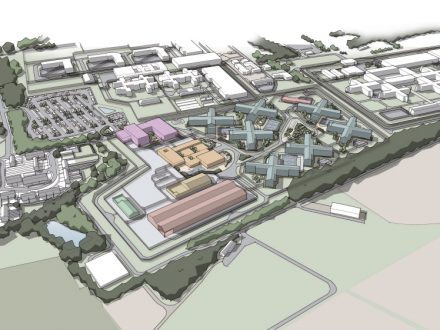 The Ministry of Justice (MoJ) will try to overturn a council decision to block construction of a massive new prison in Lancashire.

The planning application for a male prison in Ulnes Walton was submitted in August 2021, and although it was recommended for approval by planning officers, it was rejected by the planning committee in December.

The committee said the prison would “encroach” on the open countryside, put pressure on transport infrastructure in the area, and could also be too noisy for the surrounding residential areas.

The MoJ has confirmed that it has launched an appeal against the ruling.

A Prison Service spokesperson said: “We have carefully considered the council’s decision and have decided to appeal. We will continue to work closely with them and the community throughout this process.”

The Ulnes Walton prison, sized at 575,000 square feet, has been dubbed a “super prison” and would accommodate 1,715 inmates in seven blocks. The plan is to build it adjacent to two other smaller prisons, HMP Garth and HMP Wymott.

The land is currently partly used as space for a boiler house, which would be demolished and moved elsewhere on the same site. Construction work onsite would include building a car park and secure perimeter fence.

The new build will be delivered in four phases, with the initial phases involving work-enabling works, demolition work, and relocation of the boiler house and fencing. The final phase will be the construction of the prison, which will be carried out as part of the government’s £4bn New Prisons Programme.

Kier, Wates, Laing O’Rourke and ISG formed an alliance to deliver four prisons within this scheme. Modern methods of construction will be used and the contractor will be obliged to commit to 25 per cent of local spend within 25 miles of the site.

According to MoJ estimates, during the construction phase the proposed prison will generate a GVA of £117m  within the region.

Local newspaper Lancashire Live reported that the original application had more that 130 objections lodged against it, including push-back from residents. There are also concerns that the prison population will outstrip the local population.

The MoJ has said that the Category C prison, which includes training and resettlement cohorts, is needed in the region. It cited data from November 2020, which showed that 1,121 Category C men had home addresses in the north west and were being held in prisons outside the region.