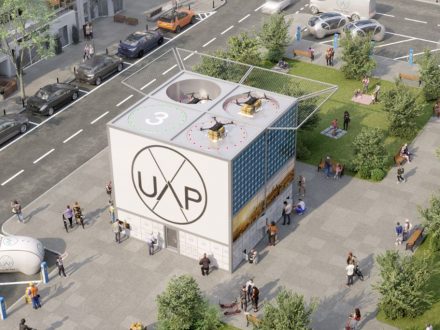 Sir Robert McAlpine has begun work on a ‘world first’ airport for drones and vertical take-off vehicles in Coventry.

The project called Air One has been developed by Urban-Air Port (UAP), a start-up that plans to build hubs for drones and other small vertical take-off vehicles.

Construction will include a steel frame dome with a 46 metre diameter that will be covered with tensile fabric. Other work includes the building of an air-taxi passenger lounge space, a control office, logistics area and a disaster management and security area. UAP has claimed it will be the world’s first fully operational hub for future electric vertical take-off and landing (eVTOL) aircraft.

Air One is being funded by £1.2m government grant by UK Research and Innovation’s Future Flight Challenge. The grant has been matched by South Korean firm Hyundai’s Supernal flying car division, which recently bought a minority stake in UAP.

UAP founder Ricky Sandhu said: “We are absolutely thrilled to get Urban-Air Port’s Air One on site – this marks a unique and transformative moment where the UK positions itself as the world’s leading player in advanced air mobility.”

Coventry City Council said that the scheme would help to decarbonise transport and councillor Jim O’Boyle added that the facility would help the environment by taking vehicles off the road.

Air One will be completed in time for a launch in April this year.

McAlpine said the project would help the contractor involve local schools and workers and deliver “measurable” social value in the region.

Last month, Coventry City Council, along with Warwick District Council, approved plans for a gigafactory that would produce batteries for electric cars.