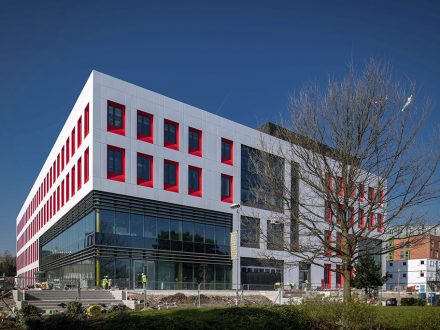 A striking atrium filled with natural light forms the centrepiece of a new science and engineering building at the University of Salford, built by Morgan Sindall. Paul Thompson reports

Straddling a fold in the River Irwell in Greater Manchester, the city of Salford dates back to the early Middle Ages, when it was known as Sealhford. Over the centuries it developed into a thriving market town and then became an important centre during the industrial revolution.

It was during the region’s Victorian heyday that local architect Henry Lord was at his busiest. His designs enrich not just Salford but other towns across England’s northwest, with ornate buildings featuring bright-red bricks. Lord’s work may strike a particular chord with fans of rock band The Smiths, given that the arched brickwork of the Salford Lads Club featured in a photo of the group on the 1986 album, The Queen is Dead.

Lord designed the Peel Building, the oldest facility still in use at the University of Salford and an iconic symbol of the institution. In the 126 years since it was opened it has witnessed the steady evolution of the university’s main campus, including the work currently being carried out by contractor Morgan Sindall Construction at its heart, where a brand-new facility is taking shape.

The new Science, Engineering and Environment (SEE) Building is set to house some of the university’s main departments. Students progressing through courses in engineering, robotics, science and the built environment will benefit from the new centre, and the tie-ins it will offer with specialist firms, once it is completed ready for the next academic year in September.

The four-storey building will offer testing and laboratory facilities, as well as a wind tunnel, lecture theatres, break-out study areas and offices. It will also feature a double-height workshop and testing facility, complete with a strengthened floor and gantry crane.

The new SEE Building is being constructed within the footprint of a former hall of residence. It sits on a raised platform, formed during the construction of the UK’s first subscription-funded public park, Peel Park, which opened in 1846. The campus also lies alongside the River Irwell.

“It is a brownfield site,” says Justin Kay, senior project manager at Morgan Sindall. “The campus is built on around 12 metres of fill, but we needed to excavate around 2 metres of that, re-engineer the fill and compact it back in layers. It is one of the reasons we have a suspended ground-floor slab.”

It is not the only work that the team had to do in the ground before launching the steel-framed structure. Specialist subcontractor Volker Ground Engineering installed a forest of 191 continuous flight auger piles with diameters of 600mm, reaching 23 metres into the Lancashire substrata beneath the building. That groundwork might have been even more extensive had the team stuck to the initial plan, which called for the frame to be constructed using heavier, reinforced concrete, rather than steel. This key switch was made during an initial value engineering process.

“There are big carbon-saving gains by not using concrete. But, principally, [steel was chosen because] the design has some really large spans. It is a 9-metre grid”

Kay says several factors influenced the decision: “There are big carbon-saving gains by not using concrete. There is little repetition across the frame. But, principally, [steel was chosen because] the design has some really large spans. It is a 9-metre grid, so using steel became the obvious answer.”

The braced-steel structure features a suspended ground-floor slab 250mm thick, except for the section of floor within the double-height testing centre. Here, the team has installed a heavily reinforced, 1-metre-deep floor slab, with a reinforced steel mat fixed at 150mm centres. Steel-fixing eyes are cast into the concrete. This extra-strong floor has been cast independently of the rest of the ground-floor slab, although they both sit on a common gas membrane.

“The strong floor was installed once the building was watertight,” Kay says. “It is quite a complicated method and there is no flexibility in the tolerance for the fixing anchors – plus or minus 1mm in both vertical and horizontal planes. It is checked for level and plumb again and again at every point throughout the process.”

Halifax-based Elland Steel carried out the fabrication and erection of the SEE Building’s steel frame. It used two mobile cranes to help lift in the 1,000 tonnes of steel, as well as the precast concrete stairs used throughout. Much of this steel is left visible, giving the final design an industrial feel. Intumescent paint has been applied across the frame, with the perimeter beams coated offsite so that work could progress on the cladding installation and getting the structure watertight.

The cladding that envelops the bulk of the building’s steel frame is a distinctive off-white aluminium rainscreen system with window reveals picked out in red. The colour choice is a nod to the university’s signature style, rather than a reference to the football team based at Old Trafford, just a couple of miles to the south. The rest of the building features glazed panels and curtain walling, including a two-storey glazed section in its north-eastern corner and a floor-to-ceiling roller-shutter door in the testing centre.

A massive central atrium runs the length of the building’s spine. A huge roof light, measuring 9 metres wide by 40 metres long, floods the space with natural light. The glazing forms a key element of the design when it comes to meeting the building’s BREEAM ‘Excellent’ target for energy efficiency, alongside 154 roof-mounted photovoltaic panels and an air-source heat-pump system, which will help to keep the building warm during the cold Mancunian winters.

“Other than the industrial gases we need in the laboratories, this building will be 100 per cent electrically powered”

“The building will be fully self-power generating,” says Charlotte France, construction projects manager for the University of Salford. “It is important to us that the building is as energy efficient as possible. Other than the industrial gases we need in the laboratories, this building will be 100 per cent electrically powered.”

The final use of the building changes at each level, and although it is designed to be as flexible as possible, there are areas where the project team has tailored construction to accommodate these slightly different uses.

At the third-floor level on the north side of the SEE Building there are laboratories that will feature vibration-sensitive equipment. Here, three steel trusses and a 300mm-thick floor slab will help to ward off any possible disruption to experiments – a departure from the 130mm-thick floors across the rest of the structure.

With just a few months before the project team is due to hand the building over, ready for its first batch of undergraduates, work is continuing apace. But, come September, the students will have a state-of-the-art facility ready to help propel them into the world of work.

Under ambitious plans to redevelop and enhance the University of Salford’s campus, the new SEE Building will become its prize asset on completion.

Designed to BIM Level 2, the university attaches great importance to the integration of the BIM model within its own facilities management (FM) team on completion.

“This is the first proper BIM model that our [FM] team will take on. We have a relatively small FM team here, so we didn’t want to be overwhelmed. They have been involved throughout the construction process and understand all the work that has been put in, so it shouldn’t be too much of a shock to them when we take the building over,” says Charlotte France, construction projects manager for the university.

The building is one of the first projects under the ambitious Salford Crescent and University District Masterplan, a huge £2.5bn, 100-hectare regeneration scheme spearheaded by Salford City Council and the University of Salford.

The regeneration project is expected to take a decade to complete. It will include the construction of 2,500 homes, business space and further improvements to the university campus.

For Peter Dentith, head of capital projects at the University of Salford, delivering the new SEE Building has offered much to students, local businesses and the wider community.

Like many clients, the university has a split quality/cost ratio when considering tenders – a ratio of 70:30, with the emphasis on quality rather than cost.

Dentith says that part of that “quality” submission has to be wrapped up in the delivery of real social value for students at the university, and also for the wider community – through sponsorship with local firms and colleges.

“Our students are part of the Salford community and we want our contractors to be part of that too. The completed building will offer facilities for community initiatives, and we want to be able to draw people in, encourage them and help with training wherever possible,” he says.

It is a move that the Morgan Sindall site team has embraced with numerous work experience placements and internships offered across the two-year construction period. That close relationship has seen two of the university’s students land full-time roles with Morgan Sindall, while trade apprentices and students from local colleges have also benefited from site visits.