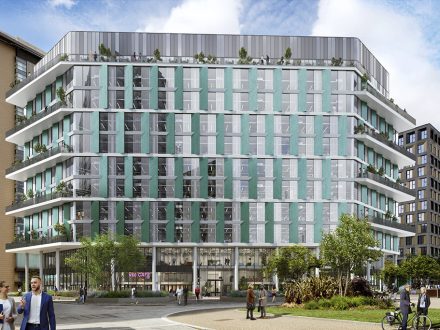 An office being developed in the heart of Media City, Salford, is set to triple in size, according to revised plans.

However, the company has now submitted plans for a 350,000 sq ft grade A office building, complete with 28,000 sq ft of public realm to “support health and wellbeing”.

The 11-storey building, which will aspire to achieve BREEAM Outstanding, will also have 15,000 sq ft of leisure and independent retail space on the ground floor, in addition to space for a 283 capacity safe bike hub with changing facilities.

Peel has said the revised plans “signal the next phase” for the creative, digital and tech destination’s expansion plans. It is the first significant development milestone since developer Landsec’s 75 per cent acquisition in November 2021.

Aluminium panelling will feature on the exterior of the building to provide an “architecturally striking” design, and will complement efforts to decarbonise the design and construction phase. It will join a cluster of net-zero carbon buildings currently within Media City’s portfolio.

Construction work will begin next summer, subject to planning permission.

Media City managing director Stephen Wild said the revised plans would “bring a striking, new and sustainable building” to the site, which is positioned opposite ITV and The University of Salford media campus.

He said: “A considerable area within the development will cater for SMEs within our flexible workspace offer Arrive, as well as larger office floor plates for businesses with a greater space requirement.

“Its design, spec and feel will very much reflect the innovative and cutting-edge immersive industries we will be targeting as we move into the next phase of Media City’s evolution.”

Landsec chief executive Mark Allan said: “Media City is a unique destination, currently unrivalled in the UK for its breadth of offering, from global content creation and innovation, to waterside living and leisure.

“Mixed-use developments such as this, with a clear sense of place, are becoming an increasingly important ingredient in the fabric of our cities. This next step in Media City’s evolution demonstrates our commitment to Salford and the vibrancy of the office market in Greater Manchester.”

Construction on the existing Media City site began in 2007, with the BBC moving its staff into three buildings on site in 2011. Bovis Lend Lease was the main contractor on the work. Ericsson and ITV are also based at the site.

Construction News reported in 2019 that Peel Media and Legal & General Capital had secured a £292.5m loan facility as part of the JV’s push to double the size of Media City.

Peel has previously stated that the expansion would be backed by £1bn of private investment.