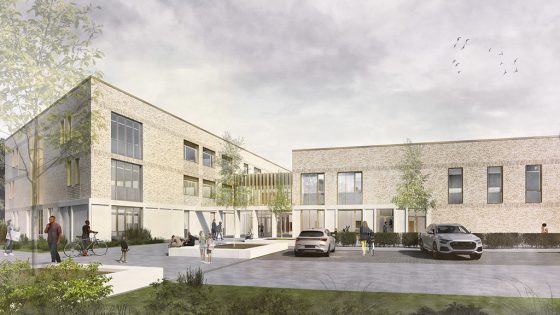 A project to build a 19,500 square-metre school campus in Dundee has received the go-ahead.

The £60m campus, which includes a main school building of up to three storeys, was approved by Dundee City Council this week.

East End Community Campus is designed in the shape of an ‘H’, with the main three-storey building measuring 13.7 metres in height. A further two-storey sports and community block will stand at 10.1 metres in height.

Facilities on site will include sports pitches, an auditorium, a library, teaching and informal meeting spaces, learning-plaza zones, multipurpose rooms and a cafe.

Robertson Tayside managing director Kevin Dickson said the project “exemplifie[d] the characteristics and drivers for the next generation of low-energy and carbon-reduction educational environments”.

Robertson was awarded the job via the £4.2bn Major Projects 2 framework, on which it secured a spot in January.

“As the construction partner of choice, through Procurement Hub Major Projects 2, we will also be delivering significant social value to benefit both the community and the local economy,” Dickson said.

Willmott Dixon and Farrans Construction were also named on the framework, which covers jobs in local government, housing, health, transport and education sectors in England, Scotland and Northern Ireland. Robertson will specifically work on the framework’s schemes in Scotland.

The framework itself includes a number of requirements, including that the main contractors must pay their subcontractors within 19 days and that they must only use renewable energy on site.

Work is set to start in the spring of 2023 and students of Braeview Academy and Craigie High School will move in once the build has been completed in 2025.

Holmes Miller director Mark Ellson said: “The design of the East End community campus is set to deliver on three fronts: to bring two schools together and conduct effective teaching, to provide a building aligned with long-term sustainability commitments, and to offer valuable space for local community benefit.”