Nuclear fusion: building the abundant clean power of the future?

Tim Clark visits an Oxfordshire research centre set for expansion in a bid to develop a long-sought energy solution, with upcoming work for contractors

Some liken generating fusion power to the moon programme. Others argue that compared to landing a man on the moon, fusion is much, much harder. However, despite the immense challenges, the dream of harnessing the power of a star to make abundant, clean energy has been given a boost at a science park just north of Didcot in Oxfordshire.

The Culham Science Centre, which has been home to the UK’s fusion research for more than 40 years, aims to design and build a working commercial fusion reactor by 2040. Supported by £220m of government funding, the Spherical Tokamak for Energy Production (STEP) research programme is key to this process.

Construction News visited the science park to see how it is being overhauled in preparation for a new push in this possible breakthrough in clean energy.

“We have a global need for additional clean energy sources to solve the climate crisis. There is no question about that,” STEP director Paul Methven tells CN. “But, in solving it, we can translate a scientific leadership position in fusion in the UK, and everything that has gone on in Culham over the decades, into a delivering commercial leadership.”

The timeline for development is ambitious. A concept design for the prototype fusion plant is to be finalised by March 2024, and a site for the first reactor is set to be chosen by the end of this year, from a shortlist of five possible places across the UK. A delivery model is also expected to be finalised around the same time.

“The UK has an industry that is highly capable in construction and engineering, but has never tackled this funny animal called fusion before,” Methven says. “So this is one of those quite unusual circumstances where a client such as the UK Atomic Energy Agency (UKAEA) knows more technical[ly] about a problem than the industry that is seeking to partner with [it] to deliver.”

The fusion programme is structured around three partnerships. UKAEA is the fusion partner, and will work with an engineering partner and a construction partner on the experimental reactor.

When it comes to construction partners, what kind of contractor is UKAEA looking to sign up?

“Major programmes are a strange combination of having unfaltering ambition and relentless pragmatism. And they don’t always sit well together, these two things, but you have to have both because nothing of real significance and value is delivered without vaulting ambition. And yet, at the gritty end of delivery, nothing is actually achieved without being seriously pragmatic and looking at the numbers,” says Methven.

“You may see some high structural-load requirements or high-power loads, but this is all within the capabilities of a tier one or tier two contractor”

The Culham centre has decades of experience in researching fusion designs and running the numbers. The laboratory is home to the Joint European Torus, an experimental fusion reactor, which was designed and built in the late 1970s.

The fusion research programme hit the headlines in February, when it produced a sustained fusion reaction that produced 59 megajoules – a significant breakthrough for the tokamak.

According to Methven, the limiting factor of Torus is the age of some of its components, such as the copper magnets, which are prone to overheating.

Although the technical requirements for fusion may sound daunting, UKAEA head of construction Dan Bowerman says the task for contractors will be quite simple: “We build sheds with really strong foundations. Our buildings are not that unique – the stuff we put in them is. You may see some high structural-load requirements or high-power loads, but this is all within the capabilities of a tier one or tier two contractor.”

The Culham centre is undergoing an £184m overhaul to enhance its research and development facilities as part of the government’s fusion foundation programme. This investment, which is separate from the STEP funding, includes offices, a reception centre, a fusion demonstration plan building and an advanced robotics test facility.

“This whole western flank is being redeveloped. We have other developments around the site. A lot of projects are under way – some in tender, some in the design stage,” Bowerman adds. “There are upcoming tender opportunities for different sizes of projects. The general fusion project opportunity is huge.”

McLaughlin & Harvey is among the firms already working on site delivering new offices, while Atkins landed a design package for a research centre at Culham in 2021. UKAEA has grown its in-house construction team to accommodate the rise in workload at both Culham and UKAEA’s second research site at the advanced manufacturing park in South Yorkshire. At Culham, diggers and piling rigs prepare sites for new buildings adjacent to the 1960s edifice of the first wave of fusion research buildings.

The fusion plans are separate from the large-scale ITER fusion reactor in France, of which the UK is a partner. The aim is to build small power stations of about 100MW or more with the current STEP designs. Methven says STEP should be expecting to publish invitations to tender for the engineering and construction partner roles by the end of this year, and go through the selection and onboarding process by March 2024.

The current shortlisted sites are Ardeer in Ayrshire, Goole in Humberside, Moorside in Cumbria, Severn Edge in Gloucestershire and West Burton in Nottinghamshire. Methven notes that 15 sites were long-listed originally, so if the facility is successful, “we have the option for up to 14 more”.

“The scale of the response has to be proportionate to the scale of the challenge. The world really shifted itself when it came to COVID-19. Climate change is an existentially much bigger problem than COVID and it needs big solutions to solve it.”

What is fusion energy? 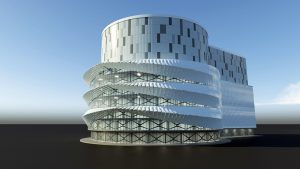 CGIs of the proposed Spherical Tokamak for Energy Production (STEP)

Nuclear fission, the process by which standard nuclear reactors work, produces energy when a heavy, unstable atom such as uranium decays into a lighter element, releasing energy in the process.

Nuclear fusion is the opposite process. Two light atoms fuse together to form another element, with the excess energy released in the form of heat. Fusion is the same process that powers the sun. 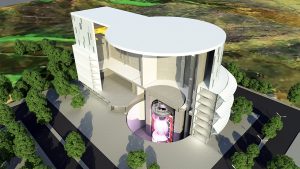 The main advantage of fusion over fission is that it produces very little radioactive waste and no high-level nuclear waste, which is costly to store.

However, producing a fusion reaction is immensely difficult. Gases need to be heated to about 15 million degrees in a special chamber called a tokamak, with the hot plasma controlled by powerful electro-magnets to make sure it does not touch the sides and melt the containment unit. Heat is extracted from the plasma by channelling the gas into a special exchange.

The process has been researched since the 1940s, but is still considered to be in its development phase.