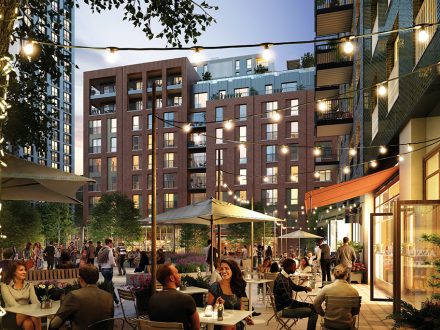 Developers behind the £7bn Brent Cross Town scheme have reached a major milestone with the launch of the first homes.

Argent Related, which is a partnership between a UK developer and a US real estate firm, has been working on the large-scale township scheme, which spans 180 acres. It includes the delivery of 6,700 homes, along with office space, leisure facilities, parks, retail and improved schools. Planning permission was first granted in 2014.

The developers have been working with the local authority, Barnet Council, and the main contractors on the job are civils specialist Galldris Group and Red Construction. Much of the wider team is the same as the forces behind the Kings Cross redevelopment, which was undertaken by the same developer.

Early work started in 2020, and the first phase of construction is still under way. Brent Cross West station, which is being built, is due to be completed by December. This phase includes the delivery of 1,000 homes for sale and rent, and up to 1 million square feet of offices, sport facilities, retail, restaurants and a new primary school.

The township, called Brent Cross Town (BCT), has a target of becoming net zero by 2030, with the help of energy-efficient designs for the homes and spaces. Swedish state-owned power company Vattenfall has been contracted to build a district-wide heat network. This centralised system is affordable and more carbon-efficient as it reduces the need for individual boilers in homes.

Argent Related partner and head of residential Tom Goodall said the redevelopment would offer “something unique to London”.

He added: “It will be a place that supports health and wellbeing, and maximises the opportunities offered by our new flexible lifestyles. As well as being focused on providing great new homes, we are focused on creating the best place to live in the capital.”