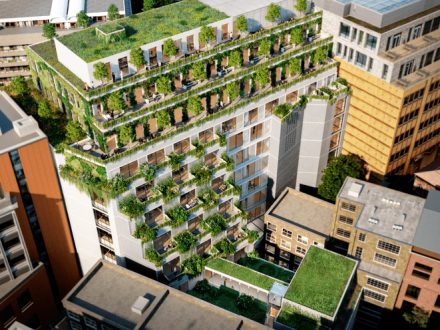 Midgard has been chosen to build a “sustainable” office scheme in the City of London.

The project, called Verdant, at 150 Aldersgate Street is located close to Farringdon Elizabeth Line Station and will be 135,000 square foot in size. Eighty per cent of the existing structure on site will be reused to achieve a low embodied-carbon footprint. The office build will stand nine storeys tall above a basement level.

The client on the scheme is real estate firm Topland Group, which announced the contract award to JRL Group subsidiary Midgard this week.

Topland Group chief executive Sol Zakay said there had been an “overreaction” to the changing dynamic of workspace since the onset of the pandemic.

“As a result, we are facing a shortage of quality new space over the next three years. A sustainable, high-quality building situated on the Elizabeth Line route is ideally poised to capture the demand from major corporate occupiers from a number of sectors that are looking for landmark headquarters buildings in what is still one of the world’s premier business locations,” he said.

Erith Group is carrying out groundwork and Midgard is due to start on site in early October. Work is expected to be completed by 2024.

In late 2021, new starts for office builds began to pick up in London, along with an inclination towards refurbishments.

Last week, Bruntwood Works submitted plans for a £93m office tower, including a rooftop swimming pool and other wellbeing facilities, as part of what it described as a reimagining of the workplace in the post-pandemic era.