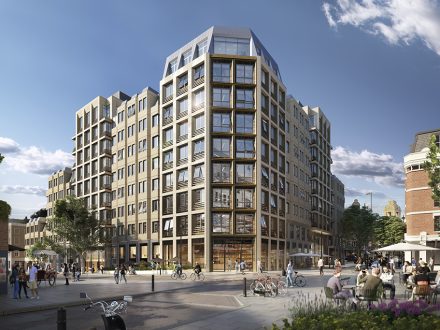 Lendlease has been appointed to deliver a 260,000-square-foot refurb job in the centre of London.

Lendlease will be responsible for retrofitting 90 Long Acre, expanding the structure from eight to 10 storeys, and improving its sustainability. The refurbished building, to be renamed The Acre, was originally designed by Richard Seifert in 1982. Work is set for completion in the fourth quarter of 2023.

At least 80 per cent of the original structure will be retained, Northwood said, cutting the project’s embodied carbon by half, compared with a clean-sheet build.

The developer said it is aiming for net-zero carbon in operation, with the revamped building set to run on electricity alone. The Acre will be equipped with blue roofs for rainwater harvesting, which is expected to reduce water use by half. These measures are expected to see the building achieve a BREEAM Outstanding certification.

In November 2021, McGee was appointed to deliver demolition, piling and reinforced-concrete works at the site. Arup has been appointed as an engineer on the project.

Lendlease Europe managing director for construction Simon Gorski said: “This is a huge opportunity to modernise the structure and create a workplace that is fit for a post-COVID world.”

Westminster City Council gave the project the green light in November 2020, despite protestations from the Covent Garden Community Association, which said the proposal would reduce the amount of public space and have a “very serious adverse effect” on nearby conservation areas.