HS2 and the long-term view of going diesel-free 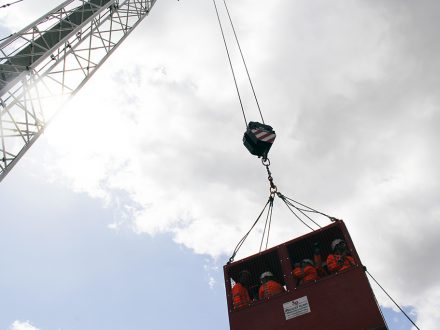 On the face of it, HS2’s South Kilburn site is no different to any other construction site in the country.

As you would expect, groups of construction workers are donned in high-vis jackets and helmets, excavated spoil is being loaded on to a dumper truck for removal and an enormous white crane towers over everything in its wake. But there is something revolutionary going on that can’t be seen with the naked eye.

If you close your eyes, the quieter-than-normal whirring of construction machines is the biggest clue that this is no ordinary construction site. And the reason is that HS2’s South Kilburn site runs 100 per cent on electricity, not fuel. In fact, there is a massive noise reduction compared with the use of diesel – taking predicted noise emissions down from 105 decibels to 78 decibels.

A view of the site located in residential South Kilburn

Run by the Skanska Costain Strabag JV, the site is tucked away in a residential West London neighbourhood. Quite unlike the sprawling HS2 sites in Euston or Long Itchington, the Kilburn site even shares a makeshift wall with neighbouring St Mary’s Catholic Primary School.

The site is needed for the construction of the Canterbury Road vent shaft. The shaft is in mid-construction and 22m below ground, which is less than halfway to its final depth of 56m. HS2 is building a vent shaft as a safety measure to provide ventilation to its train tunnels and it will be perpendicular to the tunnels. The location was strategically chosen, for it lies between the major London stations at Old Oak Common and Euston.

Should there be a fire once the railway is operational, the concrete shaft with a yellow, waterproof coating will suck the air in from the tunnels. It will then compartmentalise smoke into a different area. As a result, it will keep the tunnels from getting smoked out. 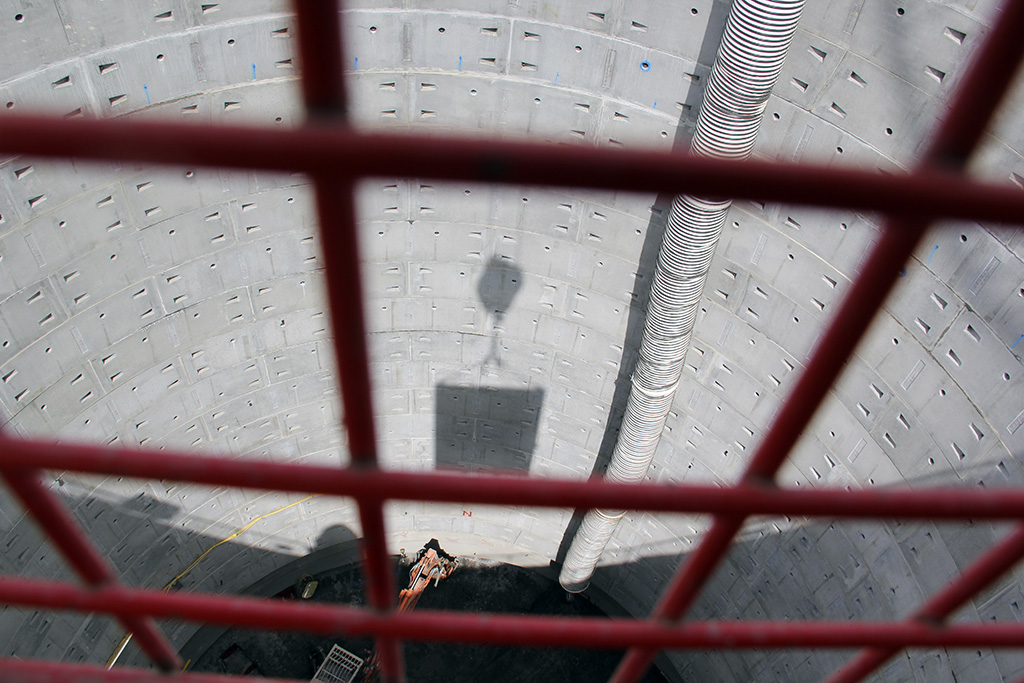 The view into the shaft vent from the carriage

While the vent shaft will be largely hidden beneath the ground, above it there will be a building called a headhouse, which will act as a centre for fire-control systems for the railway running beneath it.

In truth, the vent shaft and headhouse are nothing out of the ordinary. What is special is that they are being delivered without diesel.

The concept of diesel-free in construction has been associated with high costs. Small contractors have feared these costs could even crush them into administration.

Pointing to a 160-tonne electric crawler crane, Skanska Costain Strabag JV managing director James Richardson admitted that running such machinery on electricity does cost a “premium”. However, the cost of buying expensive, diesel-free machinery would balance out in the course of five, six or seven years. 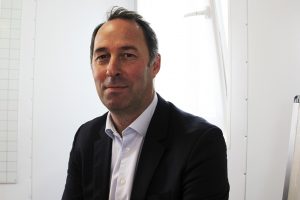 He said: “We do this by assumption because we have to pay for it, but it in the long term we can actually have a relatively cost-neutral position.”

Skanska Costain Strabag JV hasn’t bought the crane, but is hiring it for the 12-month time period it is required for, as the cost of the electricity used to power the machines is less than diesel.

The diesel-free machinery on site, like the electric crane, is plugged into a mains connection, which resembles a giant mobile-phone charging unit. The mains connection is worked out between the contractor and the distributor, UK Power Networks. On this site, the proximity to a school strengthened the case for HS2 to be able to power the site quicker.

Richardson said economies of scale was another factor that drove costs down. “We’ve worked to a volume of electricity with the government, with procurement of electricity – that’s brought our overall price of electricity down. And it’s enabled us to, within budget, actually get sustainable electricity as well,” he added.

The other carbon-cutting innovations on site include the use of biofuels such as hydrogenated vegetable oil (HVO) on machines that include the concrete-spraying robots and an electric compressor. This particular site is mostly focused on electric-run vehicles and machinery, whereas other HS2 sites are trialling the use of hydrogen in generators. 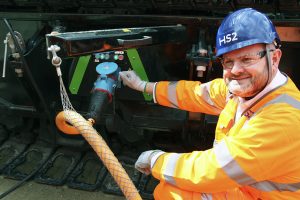 HS2 minister Andrew Stephenson was appointed to his position in February 2020 and has tracked the move towards eliminating diesel on construction sites. He said it made “financial sense” to work towards the same, especially for HS2.

“The benefits of having the largest construction project in Europe in [a] HS2 programme is that it allows the supply chain to invest long term,” Stephenson said. “So, a piece of kit like this crane costs an awful lot. But, of course, when you have that pipeline of work – not just building this first section from London to [the] West Midlands, but then continuing from the West Midlands all the way through to Manchester – it’s allowing the major construction firms on the supply chain to invest long term in skills and apprenticeships, but also in the new greener technologies that we need for the future.”

As well as being more environmentally friendly, the move to run sites on electricity rather than fuel has become more attractive following the red-diesel ban.

In the run-up to the red-diesel rebate in the construction industry, which ended on 1 April, trade bodies from the construction sector wrote a last-minute plea to leaders in the government to push back the rebate by a year. The COVID-19 pandemic, they said, had led to shortages in semiconductors and a slowdown in biofuel production, which meant the industry would have to rely on the more expensive white diesel or diesel without a tax rebate. They were united in saying that the industry was not ready to go diesel-free.

However, Stephenson said the industry was innovating more quickly than expected. He recalled a visit to a battery-manufacturing site in Coventry in 2019, where there was a “very small” electric JCB. “Everyone at the time said, ‘ah well, you know, that’s fine, these little JCBs – they’re fine being electric. We’ll never getting anything bigger’.”

But, at 6-foot 7-in tall, the minister stood in the shadow of the electric-powered crawler crane at the Kilburn site and spoke proudly of the “much bigger”, electricity-powered, 250-tonne crane at work on HS2’s Curzon Street station site in Birmingham.

“I know lots of companies across the construction sector are looking at this and looking at how they can innovate, and there are others who are a bit concerned,” Stephenson added. “But, again, I would say long-term investing in infrastructure, like HS2 [has done], supplies that long-term security. That pipeline allows businesses to invest in new plant and machinery, which doesn’t need diesel and doesn’t need the red-diesel rebate.”

The crane used on the vent shaft site is one of five in the world and there are two others on HS2 sites. Three drivers at the South Kilburn site have the sign-off for operating electric cranes, but only two can drive the 160-tonne machine.

One of them is Leon Sobers, a social worker turned crane driver. He said that working with an electric crane saved time on fuelling up large tanks that were typical for large-plant machinery. “Bar a power cut, you are fuelled all day,” he said. “You’ve got about five hours’ battery life – that’s if you are working hard. I’d say eight when having a slower day.” 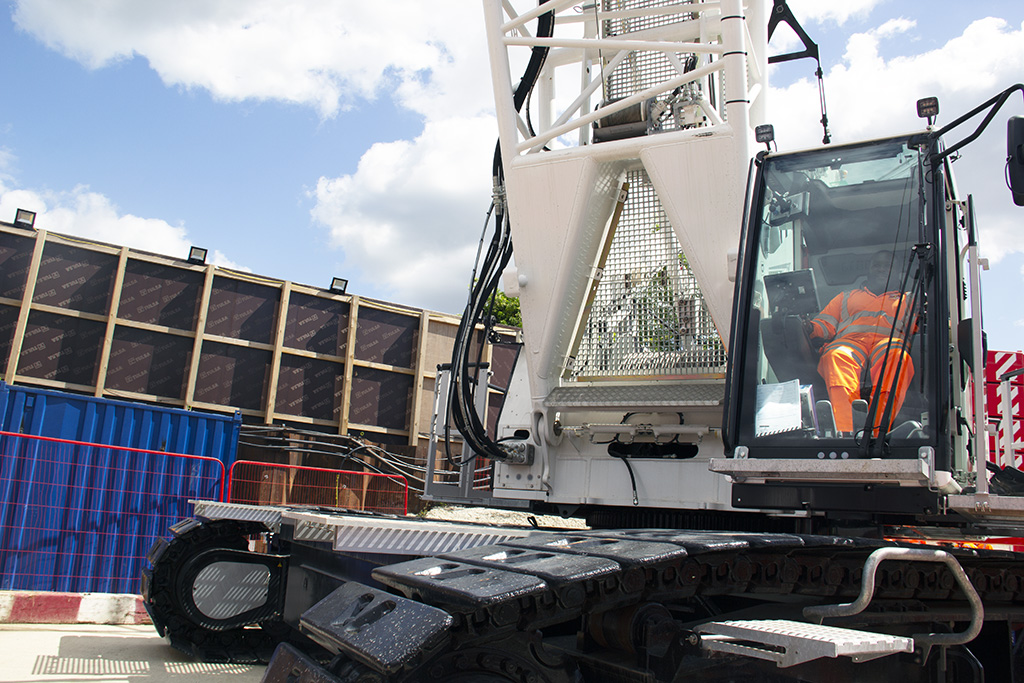 Leon Sobers, the electric crane driver, does a demonstration 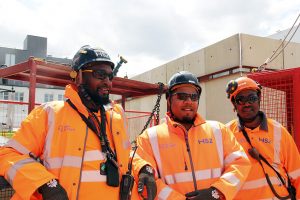 Christopher, Jason and Jordan, workers on the South Kilburn site

The drivers were trained by the crane-hire company, Select, an HS2 subcontractor.

Richardson said that even though the drivers received training for certain nuances in operating the diesel-free crane, the gear wasn’t too different from what they were used to. “It’s not like we’re changing completely what we’re doing – we’re actually morphing into that.”

He added: “A majority of those machines actually operate the same way as the existing machines. In fact, part of our initial move is to use existing pieces of plant. And all we do is convert them to use HVO.”

In 2020, HS2 decided it would work to remove diesel from all of its sites by 2023. At the time, Richardson said it seemed like the target was “really audacious”. However, this changed when the wider supply chain around HS2 began to come together to draw up the path to achieve the target – innovators included.

Richardson said: “Two years ago, we were talking about how we can build by diesel for a cheap price. But we’re sat in a room and we’re saying, ‘well, actually, if diesel isn’t going to be our primary source of energy, in two years’ time should we be looking at buying diesel cheaper or should we buy more electric cars at a cheaper price?’ And then you start to look at what your commitment is. What’s going to be the long-term strategy around this?”

Skanska Costain Strabag JV environment adviser Serena Ward said the neighbours had given positive feedback in response to the diesel-free efforts. Since the mains electricity was secured, generators were done away with, which meant there was a reduction in sound.

“It’s just the right thing to do,” Serena said. “I think, morally, for the primary school next door, the thought of having a massive diesel crane wouldn’t sit right.”