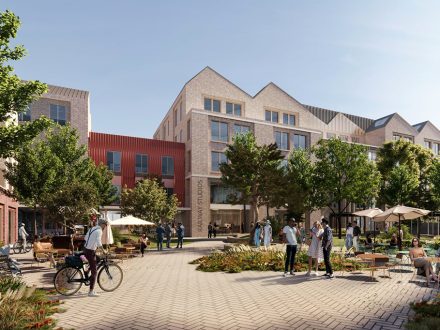 Plans for a £165m mixed-use scheme in Cambridge have been given the go-ahead.

The new neighbourhood, known as Devonshire Gardens, will comprise workspace across two buildings and see the construction of  7o build-to-rent apartments.

Offices on the 120,000-square-foot site, the former home of a Travis Perkins depot, have been designed to suit fast-growing business needs, with flexible floor plates and adaptable spaces for collaboration.

Community facilities, such as a creche, a pavilion with flexible studios and a community garden, have been incorporated into the plans, which were approved by Cambridge City Council. A new public park will connect the buildings.

Project developer Socius has said the apartments on the site, which it describes as a sustainable neighbourhood, will run on electricity from renewable sources only.

New walkways and cycling paths will be constructed as part of the vision to create a mostly car-free town, while the planting of 120 trees and hundreds of new plant species will increase biodiversity.

Cambridgeshire Chamber of Commerce chief executive Vic Annells said: “We are very pleased the scheme proposed by Socius and Railpen will be brought forward.

“Devonshire Gardens will transform an underutilised site in the centre of Cambridge, delivering much-needed modern workspace for corporates and growing businesses, as well as affordable homes that will help attract and retain talent in the city.”

In March, Willmott Dixon won a £65m job to build a mixed-use scheme in Cambridgeshire.