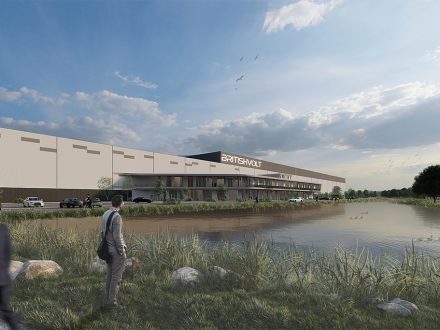 Work to construct the UK’s first gigaplant car-battery facility in Northumberland is progressing “in line” with the development plan, despite suggestions that the project has been paused.

In December 2020, ISG was appointed as the main contractor to deliver the factory that will produce lithium-ion batteries for electric vehicles.

The contract handed to ISG by the client, battery-technology developer Britishvolt, was reported to be worth about £300m. The start-up has said that the entire project is valued at around £3bn.

Phased construction on the 253-acre plant in Cambois began in September 2021. But media reports recently suggested that work on the project had stalled.

Britishvolt has now addressed those claims by insisting that construction is powering on, and the firm is regularly reviewing the impact of inflation on construction costs, in addition to the quick-changing nature of the battery-technology industry.

In a statement, the firm admitted that the construction schedule was flexible to accommodate changes, but said it expected 30,000 tonnes of stone to be transported onto site as part of the groundworks.

A spokesperson for the group also explained that rising material prices were being factored into the construction activity.

They said: “Our capital works phased development programme has been designed flexibly to enable us to reschedule activity to critically evaluate core design and build elements, optimising the build schedule to improve efficiency and optimise synergies across our phases.

“[It also allows us to] understand and mitigate the consequences of rising material prices, to ensure our new facility is geared up to become the global leader in battery-manufacturing excellence.”

The first phase of construction is due to finish in 2023, with the full factory delivered in 2027, according to Britishvolt. Delivery in phases is intended to accommodate technological advancements in the production of low-carbon battery cells.

An ISG spokesperson also confirmed that construction had not completely halted. They said: “Work continues at our Cambois site in line with the development plan and we are closely collaborating with our client to facilitate a dynamic project that is evolving with the rapid advancement in battery technology.”

In January, the government invested £100m in Britishvolt as part of a drive to produce car batteries locally, instead of relying on foreign imports. It was financed by its Automotive Transformation Fund, which helped fund the sale and leaseback of the building that will contain the factory, alongside other investors.

At full capacity, the plant is expected to have production capability for the cells of 300,000 electric-vehicle battery packs per year.

The large-scale project is expected to generate about 3,000 direct jobs and 5,000 jobs in the supply chain.