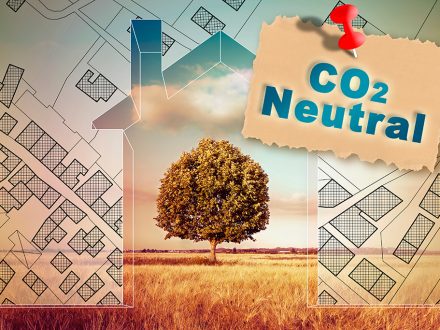 A single weak link in the supply chain could cause a big headache for construction firms under new procurement rules on carbon emissions. Keith Cooper investigates

Last summer, with little fanfare, a slim government paper slipped out a measure that had a significant, immediate and long-lasting impact on construction firms’ efforts to win jobs. A public procurement notice required government departments and their offshoot agencies to procure larger contracts only from firms that record and report so-called Scope 3 emissions.

These are the emissions generated by the supply chain – the goods and services brought in from outside. The impact on construction should not be underestimated.

Scope 3 emissions are wide-ranging. They can include the emissions generated to manufacture, transport and dispose of tools and materials, from a hammer and nails to structural concrete and steel, and everything in between. Even the emissions from subcontractors’ vehicles, from vans to excavators, must now be accounted for by those who buy in such services.

The “new commercial policy” outlined in the PPN requires all suppliers on major government contracts to make the same commitment and publish their own carbon-reduction plans, setting out how they intend to meet them.

“The direction of travel has been set”

By definition, Scope 3 emissions are not under their buyers’ direct control; details must be obtained from the subcontractors and suppliers that supply services and sell products to them. Scope 3 also accounts for more emissions by far than Scope 1 and 2, which are those that firms generate either directly or indirectly from their own activities, and already report on routinely.

What’s more, this requirement to report on Scope 3 emissions is now more likely to become commonplace as other public-sector bodies – and even the private sector – follow Whitehall’s lead.

“The direction of travel has been set,” says Jessica Boardman, an associate for law firm Bevan Brittan, which advises many public bodies. “Reporting on Scope 3 emissions is more onerous, but this kind of requirement – for suppliers to look beyond direct emissions and consider the wider supply chain – is likely to become more widespread, filtering down from central government to other public bodies.”

So how are contractors responding to this new push for Scope 3 reporting? To find out, we spoke to some of the firms leading the industry’s drive to net zero, all of whom have been tracking Scope 3 emissions already without any regulatory requirement to do so.

Skanska claims to be the first main UK contractor to set a net-zero target that included Scope 3 emissions, back in 2019.

“We saw that climate change and carbon reduction were going to be massive issues,” says Skanska director of environment Adam Crossley. “It hadn’t quite hit the headlines, but we knew it was going to be big in our industry. So, we thought, how are we going to get ahead of it?”

“We saw that climate change and carbon reduction were going to be massive issues. We knew it was going to be big”

The firm’s first step was to assess the size of the challenge it faced, while aware that many suppliers might not record their own carbon emissions. Without any actual data, it estimated its supply-chain emissions back to 2010, using a process it published for transparency. This exercise found that 90 per cent of its total emissions were generated by its supply chain and were therefore classified as Scope 3. Only 10 per cent were caused by its own activities.

As its suppliers improve their reporting, Skanska is replacing its estimates with actual emissions data. Its latest figures show that it has reduced its carbon intensity by about a half, from 347m tonnes of CO2 emissions per £1m revenue in 2010 to 182m tonnes of CO2e/£m in 2021.

One burger at a time

Willmott Dixon began reducing its carbon emissions in 2010, and has been carbon-neutral in its own operation – in Scope 1 and 2 – since 2012. It aims to be net zero across all three scopes by 2040.

“Reaching net zero in operational carbon in our supply chain is a much, much bigger challenge for us, as it will be in any sector, but particularly in construction,” Barrett, says. “But, like any elephant, you eat it a burger at a time.”

Willmott Dixon’s approach is shared by other contractors we spoke to – you start by biting off the biggest chunks.

A similar approach to cutting Scope 3 emissions is taken by Skanska. It wrote to all of its top suppliers back in 2019, asking them to collaborate in its effort to hit net zero and start gaining the skills they needed to do so.

Another way of targeting the biggest chunks of Scope 3 emissions is to pinpoint the most polluting packages of subcontracting work. Robertson is doing just this as part of a sustainable growth agreement with the Scottish Environment Protection Agency.

For this project, it is analysing the construction supply chain in Scotland and using this analysis to produce heat maps of the most carbon-intensive works, and “learning pathways” and reporting tools for supply-chain suppliers and subcontractors. Unsurprisingly, it found groundworks and earthworks to be the most carbon-intensive on-site activities for their use of heavy equipment.

Robertson’s own efforts to collaborate with subcontractors to reduce Scope 3 emissions are helped by its regional construction model.

Such an approach is used by other Scottish tier one firms with headquarters in the central belt of Glasgow and Edinburgh, says its director of sustainability and social impact, Graeme Hannah. “By having construction teams in these regional businesses, we’re able to engage well with the local community and with a partnership model with the local supply chain. This helps keep our Scope 3 emissions down.”

Robertson became carbon-neutral for its own activities in 2018, after deciding to offset all its emissions that year. By fixing this level of offsetting in 2020, while continuing to reduce its own emissions, it became “climate positive” last year, meaning that its activities actually produce an environmental benefit.

Calls from contractors for collaboration can cut both ways, of course. Reducing Scope 3 emissions isn’t just about subcontractors improving their practice and handing over their emissions data. It’s also about how contractors can get the best out of their subcontractors and suppliers.

“In construction, no one company has the answer to reaching net zero,” says Tarmac sustainability director Martyn Kenny. “The supply chain has such an important role to play to ensure the end-product is as low-carbon as possible.”

Training has a big role to play in hitting net zero, contractors say. “Organisations need to ensure their boards, executive and other key people fully understand and are literate on these issues,” says Skanska’s Crossley. The company has developed bespoke training courses in-house for key staff, such as project leaders, designers and procurement staff.

Robertson’s Hannah says his firm empowers staff to make good decisions on decarbonisation with training, management plans and site visits. “Sustainability teams are generally small teams within bigger organisations. We can’t do everything.”

Another challenge with Scope 3 emissions is that, by definition, the firms and workers who are in the best position to reduce them are not under the control of contractors. To address this, many companies – including Willmott Dixon, Skanska and Robertson – fund an industry collaboration body, the Supply Chain Sustainability School. Founded in 2012 by seven tier one firms, it offers free training and guidance, and is now financially supported by 180 companies.

“In construction, no one company has the answer to reaching net zero”

The school has become a useful resource in the industry in the drive for net zero. Last summer, it launched a tool to simplify the reporting of Scope 3 emissions. This works by allowing subcontractors to make a single upload of their total Scope 1 and 2 emissions. Contractors use this upload to calculate their share of these total emissions. Their share is based on their proportion of the subcontractors’ turnover.

Barrett admits the calculation is a proxy and “slightly imperfect”. “But what it means is that subcontractors report once and they’ve done it,” she adds. “It is demonstrating the direction of travel in a light-touch way. The last thing we want to do is be adding [a] burden to them.”

In the increasingly challenging quest for net zero, contractors should never let “perfect be the enemy of good”, Barrett adds.

In the ever-changing world of net zero, that seems sage advice.