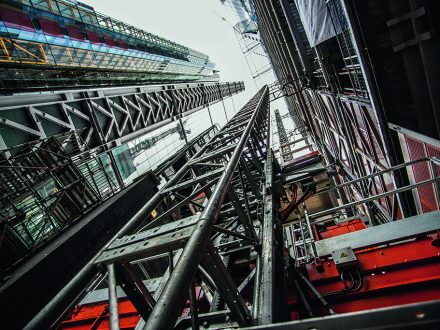 Scaffolding firms have faced unprecedented challenges and opportunities from Brexit and the pandemic. Chronic labour shortages worsened as EU workers returned home and COVID-19 sent a shockwave through the industry. The cost of timber and steel – the two core materials of the trade – became unusually and unpredictably priced, peaking at double their usual rate.

There were lockdowns, the stop-start of construction, then burgeoning demand, driven in part by the push to catch up. With many firms now holding stock bought at peak rates, it may be some time before the full impact on business is felt.

So, how are those companies responding to these pressures?

The answer depends on what sort of business they are. Large firms, with a high proportion of directly employed labour, diverse clientele and big geographical footprints, look set to weather them well.

Smaller companies with more discrete patches may suffer more, especially if saddled with loans they took out to buy stock at peak prices. And the perennial problem of labour shortages has been the most significant pressure on firms, according to those Construction News spoke to.

“Access to skilled and even semi-skilled labour has been our biggest challenge,” says Des Moore, chief executive of Trad Group. “Before Brexit, the economies of Poland and other Eastern European countries had picked up as the value of the pound plummeted, so a lot of people went home and didn’t return,” he says. “After Brexit, a number left because of the pandemic. This has been driving wage increases over the past six to nine months. Scaffolding companies work on fixed-price contracts, so we are just absorbing those costs.”

GKR Scaffolding strategy director Helen Gawor says “very average” scaffolders had been able to charge “crazy amounts of money” because of that labour shortage. “We are not one of the top payers,” she says. “We do put in things to retain people, but some are tempted away to work for businesses on short-term projects. They pay a lot of money for four to five months. People do come back to us, and it hasn’t impacted our growth.”

GKR has managed by moving labour between projects to meet demand. “We have been able to deliver all of our requirements,” she adds. “But we are perhaps a little bit more selective when tenders do come through. We have to think about the areas we can service.”

These sorts of short-term, high-paying projects, which draw labour away from staff jobs, look set to increase as more work to reclad blocks, recognised as unsafe after the devastating Grenfell Tower fire, come online. Far bigger draws are also expected as longer-term megaprojects, such as HS2 and Hinkley Point C, move forward.

“Some of the megaprojects are retaking stock of their need,” says Kaefer business and strategy director Trevor Woodward. “That is going to come back with a high demand and put huge pressure on the industry.”

Hinkley Point C, in Somerset is a job that is expected to pull huge numbers of scaffolders from the labour pool, Woodward adds. “It is a relatively attractive place to work in terms of pay.”

Many scaffolding firms say the key to tackling labour shortages is to increase direct employment, a move requiring the cooperation of clients. “I do believe that part of the skills crisis has to be clients’ responsibility,” says Gawor. “Clients have to think about the benefits of directly employed workers on their sites. It is beneficial to have an established workforce. It is safer. So, planning has got to be better,” she adds. “Clients have got to be better at giving us a solid pipeline so that we can hire against that. I can’t hire 10 people in two days, but I can go to an agency for them.”

Kaefer is refocusing on its graduate trainee and apprenticeship programmes to bring a new generation into the industry. Contractors, industry bodies and the government should all work together to create clear plans to tackle the shortage, says Woodward. “Some of our bigger clients, like BAE Systems and Babcock, are accommodating and have huge apprenticeship programmes themselves,” he adds.

The National Access & Scaffolding Confederation says it has put forward its members’ views at many industry and governmental meetings since the pandemic.

Lyndon SGB managing director Stuart Robinson says Brexit had “only a marginal impact” on its labour as it operates with relatively low levels of migrant labour and high levels of direct employment. “But, like the entire industry, we continue to feel a talent shortage,” Robinson adds. “We recognise we are likely fishing in the same pond as not just our competitors but other trades.” Scaffolding firms must “up the game” in attracting recruits, Robinson says.

“We need to get better at communicating that scaffolding and mechanical access [hoists and mast climbers] is a very good trade to have: it pays well, it’s safe, there is regular work and it has a great future,” he says.

The more unusual recent challenge for scaffolding firms has been the unpredictable and inflated costs of their two core materials: timber and steel. With such volatility in these markets, suppliers have no longer been able to fix costs. Firms have, at times, been forced to buy at high prices to meet demand, with limited opportunities to pass on the extra material cost to their clients. It all makes for a “very fragile market”, according to one material supplier (see box, below).

Carl Fallon, managing director of MG Scaffolding, which operates from depots in Birmingham, Banbury and Cheltenham, says it has been unable to sustain demands on its business despite carrying “vast amounts” of stock.

“Many scaffold companies have been caught in the supply and demand scenario not working in our favour,” he adds.
Firms felt pressured to buy at high prices to keep clients happy when other contractors were stymied by shortages of other materials. “Our business spent £2m on new equipment. Otherwise, we ran the risk of losing part of a contract and the customer forever,” says Fallon.

Don’t beat up the subbie

Lyndon SGB’s Robinson admits access to material has been a “little strangled” in the past 24 months. Its recovery has been eased by its size and ability to access international markets, he says. As part of US-based BrandSafway, it can ship kit into the booming UK market from other countries.

“But there’s no hiding from the current cost pressures, and the impact of COVID,” Robinson adds. “What certainly is not helpful is a return, in a small number of cases, to the bad old days of ‘beating up the subbie’,” he says. “The answer isn’t to just beat up on the next guy down the supply chain. This is not sustainable, nor enjoyable, for anyone. More positive solutions need to be found.”

Woodward says Kaefer manages material costs through tactful negotiation with its clients and protections built into their contracts. “We have long-term relationships with our suppliers,” he says. “In all contracts, we build in escalation mechanisms linked to national pay agreements or RPI [Retail Price Index] or CPI [Consumer Price Index], so that there is some protection with inflationary rises.”

“Without being complacent, we are very confident that there is the volume of good quality construction and infrastructure project work in front of us”

Cost inflation was not something scaffolding firms had previously worried much about, Woodward says. “At times like these, our end customers are having the same challenge: having to pass some of the inflationary price rises on to their customers. We are collaborating and negotiating what we can. At other times we have had to take on some cost when locked into more fixed agreements,” he adds. “The materials challenge is not going to go away.”

Scaffolding companies will eventually be able to recoup some of the costs borne from buying materials at high prices, says Trad’s Moore. “The opportunity you have to increase costs is on new contracts that you are bidding for,” he adds. “But the larger projects, which firms like us bid for, won’t see the light of day for six to nine months.”

As volatility in the materials market continues, the risk of further price hikes remains. GKR’s Gawor says: “We could stop taking some of those larger jobs on because of the issues of volatility. If you won a big job and you know you are going to need extra materials, there is now the issue of when you buy it.” 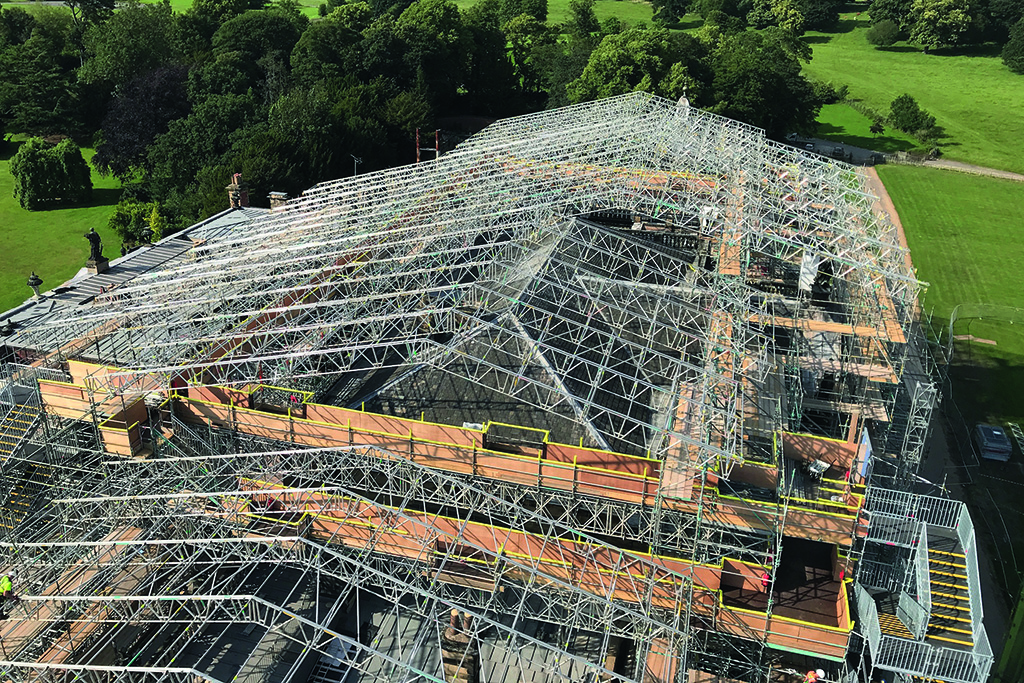 Some scaffolding firms have increased their stability in the volatile market with diversification. Working in nuclear, oil and energy processing industries helped Kaefer during downturns in the other areas it services, such as aviation, and Robinson says there are signs that the workload in aviation will recover this year.

Martin Turner, general manager of Derbyshire-based Crown Scaffolding, says diversification was key to managing its pressures. “As a business we are always looking to different markets such as the refurbishment industry and restoration clients to spread the market. Through the pandemic, Crown found it quite easy to move into the areas where other scaffold companies were overstretched,” he says.

Despite the challenges, scaffolding firms are as positive about their prospects as they are cautious about the difficulties they face. “Without being complacent, we are very confident that there is the volume of good quality construction and infrastructure project work in front of us,” says Robinson. “There’s enough work for everybody, right now,” adds Kaefer’s Woodward. “We just need to organise ourselves to be able to do it.” 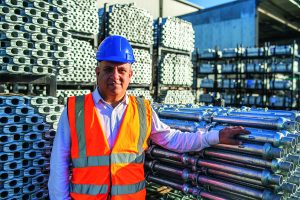 “Steel prices hit extremely high levels last summer and remain significantly higher than pre-pandemic levels. The year 2020/21 was very challenging. There was so much variation due to rising energy prices and unexpected fluctuations in raw material costs that we were not able to provide fixed prices for our customers.

Normally, when you agree on a contract with a supplier, they will adhere to the contract price over a certain period. However, prices were changing on a day-to-day basis, which resulted in some contracts being repeatedly revised.

The big question is: how do you come out of this without it affecting your business? Have scaffolding firms paid prices that are not sustainable?

Some have paid twice as much as they paid in 2019. Others paid more than two and a half times that rate because they were excited by the number of jobs that were coming through. It has created an artificial demand. If they took out loans to pay for materials, they now have to service them. What if the same level of jobs is not available? That will be the challenge. It’s a very fragile market, which we hope will stabilise soon.”