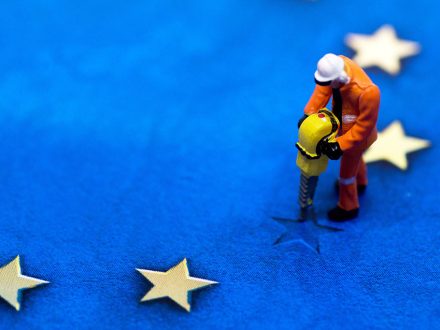 Warnings about the impact of Brexit on the construction workforce came thick and fast once the results of the June 2016 poll were in. Trainee numbers had fallen to a “calamitous” historic low at a time when 215,000 migrant workers were predicted to be lost to the industry once the UK left the EU, MPs on a parliamentary committee were told.

The scale of the challenge was spelled out in stark terms a few months later by the much-publicised Modernise or Die report. With a “dysfunctional” training regime and the threat of tighter immigration controls, the industry had to refocus on improving productivity, urged Mark Farmer, the report’s author.

So how has construction fared since the referendum and the actual official exit from the EU in January 2021? And what steps have been taken to fill the gap left by the loss of the immigrant workforce?

The post-Brexit period has been far more complicated than anyone could have envisaged. First came the pandemic in 2020. Access to EU workers tightened when freedom of movement in the EU ended in January 2021. Just this year, we’ve had the Russia-Ukraine war, spiralling inflation, rocketing energy prices and a consequent cost-of-living crisis.

These headwinds have already hit construction’s labour supply hard and further weakened its capacity to train the workforce it needs to meet future demand. More than 240,000 workers left the industry between the first quarters of 2019 and 2022. And, while the number of people enrolling on construction courses have risen, apprenticeship starts fell by 22 per cent between 2018/19 and 2020/21, according to the latest available figures.

With such heavy losses during the pandemic and Brexit, construction now faces an even tougher challenge to find and train the 266,000 extra workers that the Construction Industry Training Board (CITB) says it needs by 2026.

Further examination of these losses and trends should help construction meet such a challenge, experts say.

In contrast, the number of employed workers fell by just 52,000. The number of migrants known to have left construction during this period is even smaller, at 46,000, according to analysis by the CITB of the three years leading up to the UK’s official EU exit in 2021.

Arcadis head of strategic research and insight Simon Rawlinson offers several reasons for the attrition. “Older workers may have simply decided to stop work after not doing much during the pandemic. Some workers will have gone into other jobs, such as van driving or other Uber-type work that flourished during the lockdown.”

“COVID has accelerated the rate of attrition,” he adds. “It’s made people question whether they wanted the kind of life they were living. It was quite a tough life – and still is.”

Many self-employed workers may have become “untrackable” after opting to work informally in sectors such as maintenance, which exploded during lockdown, he suggests.

Attracting some of these self-employed workers back could help to address workforce shortages, says CITB industry insight manager Lee Bryer.

A recent ONS study found that far more construction workers who left self-employment for employment had switched sectors. In 2020/21, 8,000 people in this group took jobs in other areas, compared with 1,000 who stayed in the industry. The previous year, similar numbers of self-employed workers switched into and out of construction.

“This suggests that a lack of employee status in construction possibly played a role in the outflow to other sectors,” Bryer says. “It might therefore be a key factor in drawing people back into the sector.”

Increased enrolment on construction courses is due to more young people staying in education during the pandemic, he adds, although this has not translated into a rise in apprenticeships.

The CITB’s own studies show the number of apprentices employed per 1,000 firms fell by a third at the height of the pandemic in June 2021. Interest from employers for training was low, it reported last year. The CITB is looking at ways to fast-track young people into apprenticeships and show employers they have the skills needed.

“The challenge with apprenticeships is there isn’t enough employers interested,” Bryer says.

University of Westminster professor of European industrial relations Linda Clarke says there were 1,300 trainees in one London college she visited recently, but only 70 were apprentices. “That is a fairly typical picture. It’s such a waste,” she says.

“The challenge with apprenticeships is there isn’t enough employers interested”

“Further education colleges are starved of funding, and they do try to get students work places, but site foremans go to agencies for workers – no one is going to colleges. The big firms aren’t employing anyone; it completely destroys any training infrastructure. The method of recruitment hasn’t changed, and the shortages have got worse and worse,” she adds.

Many firms still offer apprenticeships. These include Morgan Sindall subsidiary Lovell, which is attempting to improve the perception of the industry through its local business links (see box). It is also optimistic about the potential of T-levels – an alternative to A-levels, which are geared towards skilled employment, apprenticeships or technical study.

Industry bodies say firms are reluctant to take on apprentices with such uncertainty in the market, while recognising that something must be done to train up the next generation of workers.

Federation of Master Builders chief executive Brian Berry says the government’s mistake was to cut off the supply of EU labour without enough time to fill the skills gap. “We have now got even worse levels of skills shortages,” he says.

The small and medium-sized firms represented by the trade body are put off by the extra cost of taking on apprentices. “In the last two years they’ve been really busy dealing with a lot of difficulties and the materials shortages, but the industry does need to step up,” says Berry.

With worsening labour shortages and little appetite for training, it’s little surprise that firms are looking to increase migrant labour, although this now comes at a greater cost. Since January 2021, larger firms have had to stump up £1,000 a year in immigration skills fees for every worker they bring over. The total cost for a five-year period is about £9,500, according to

Thomas Mayhew, a senior associate at immigration law firm Fragomen. “The UK system is quick, easy and efficient, but expensive,” he says. “Many in the sector have realised that with Brexit and the loss of free movement of EU workers, they have to engage with the sponsorship system to fill labour shortages.”

“Since January 2021, larger firms have had to stump up £1,000 a year in immigration skills fees for every worker they bring over”

The aim of the skills charge is “to encourage British businesses to recruit and train UK employees”, according to the government. But contractors are questioning where the fee goes. “They see the cost involved for this skills charge and ask, ‘What is the benefit of paying this? Where does this skill surcharge fee go?’,” one industry adviser told Construction News.

Industry lobby groups have pressed the government for bespoke construction visas to tackle the acute shortage and boost apprenticeships.

The National Federation of Builders called for the introduction of temporary construction visas with training funding attached. “This would sort the short-term shortage while providing a medium-term solution,” says its head of housing and planning policy, Rico Wojtulewicz. “In the six years since the referendum, we could have had trained two tranches of apprentices. Instead, we have nothing.”

In a statement, a government spokesperson said its point-based immigration system “already provides for a wide range of occupations within construction”, including bricklayers, plumbers and carpenters. The government would soon ask its Migrant Advisory Committee to review the shortage occupation list and urged the sector to submit evidence to it, she added.

The immigration skills charge aims to incentivise employers to recruit and retain resident workers, according to the Home Office. The funds it raises support skills and training as part of the Department for Education’s budget, CN understands.

With so little progress made on addressing the industry’s workforce issues since the Brexit poll, it seems that Farmer’s call for a focus on productivity will be key to the industry meeting demand in a recovering economy.

“We’re going to have to become more productive because we’re being forced into it,” says James Garner, global head of data and insights and analytics at Gleeds.

Regarding productivity, there have been glimmers of hope during the pandemic. Monthly construction output was 3.7 per cent higher in March this year than in February 2020, according to the Office for National Statistics.

“We’re six more years into that pain. Now it’s going to get really painful for the industry”

This increase in output, alongside a declining workforce and falling apprenticeships, seems like good news. Rawlinson believes it is due to an increase in offsite manufacturing and changes to working practices during the pandemic. “There were fewer people on site at any one time. People got the job done as quickly as possible,” he says.

But six years on from his review, Farmer, also chief executive of consultancy Cast, believes these positive signs in productivity will not last long.

“Those subtle changes to the modes of working are not there anymore,” he says. “We have more people retiring each year – young kids aren’t seeing construction as a career of choice. Wage inflation means firms will be paying more for labour. Even if their productivity is improving, their actual productivity will be going down. COVID hasn’t changed the structural barriers in the market.”

Without a focus on productivity, the industry risks even more pain than what Farmer predicted in his review. “We’re six more years into that pain,” he says. “Now it’s going to get really painful for the industry. Job to job, things are going to get worse and worse.”

It’s another dismal prediction, but one that construction will have to take seriously to remain profitable – unless it finally finds a way to grow its own labour force.

Local engagement: the key to the workforce challenge

The pandemic placed additional strain on the industry, and now the cost-of-living crisis is forcing employers to work harder to attract and retain the limited talent available to us. I believe the sector is now focused on long-term strategic challenges rather than short-term post-Brexit concerns.

We did not see a large reduction in our direct workforce as a result of Brexit, but we have experienced constraints in London, East Anglia and rural locations within some trades in our indirect workforce.

But I believe the ongoing skills shortage in construction and housebuilding is more about awareness and perception of the opportunities in our sector than Brexit.

As a decentralised business, Lovell regional teams are empowered to engage with local schools, colleges and universities to raise awareness, and offer opportunities at our firm. We recruit apprentices to work with our indirect workforce, and our national graduate programme ensures a pipeline into technical and professional roles.

We are also excited about the opportunity offered by T-levels to attract talented, young people to those less obvious technical and professional roles associated with housebuilding.

Our ambition is to ensure the skills of our workforce are aligned to the emergence of alternative methods of construction.

Employers need to attract more women into construction and…