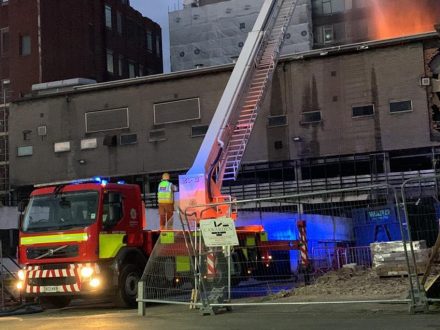 A fire which broke out at a construction site in Derby on Saturday evening was started deliberately, police investigations have revealed.

Bowmer + Kirkland were the main contractors at the site located on Macklin Street, Derby. The work in progress is part of a £200m redevelopment to build a 3,500-capacity performance venue called Becketwell Performance Venue.

A subcontractor and demolition specialist called Cawarden Co Ltd were on site since earlier this month. The local firm was working on the second phase of demolition of the derelict buildings as part of pre-construction.

A spokesperson for the Derbyshire Fire and Rescue Service said the fire was located on the seventh level of Laurie House, a derelict building which was formerly used for a nightclub and office space. It was in line for demolition by Cawarden.

The Derbyshire Fire and Rescue Service spokesperson said: “A joint police and fire investigation into the cause of a building fire on Macklin Street Derby yesterday evening has concluded that the fire was started deliberately.”

They did not provide details on how the fire was caused.

Cawarden’s managing director William Crooks said that the firm was surveying the site to reassess it for new risks in light of the fire.

“Our demolition engineers are currently assessing the building to establish whether we can continue with the original planned method statement,” he said. “We are pleased that nobody was hurt.”