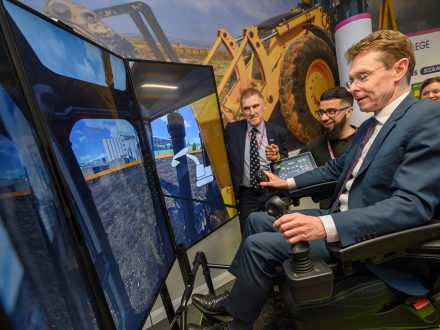 Balfour Beatty Vinci (BBV) is looking to fill 3,000 job vacancies in the West Midlands to support the delivery of HS2 over the next four years.

The joint venture, which also runs the Balfour Beatty Vinci Skills Academy in Birmingham, said that this recruitment drive was closely tied with upskilling local people in the region.

BBV is working on the 90-kilometre stretch of railway from Warwickshire to Birmingham and further on to Staffordshire and estimated that it would create a “a constant labour demand” of 10,000 jobs until 2027/28.

The Skills Academy was set up in November 2021 at South & City College Birmingham’s Bordesley Green campus, with £1.1m from the West Midlands Combined Authority.

Students finish BBV’s specialist general operative training program in four to six weeks, followed by a paid work trial in a construction field of their choice. When they successfully complete the trial period, they are then offered roles with the JV’s local labour providers.

BBV said the academy was the first of its kind, but that plans were in place for more across the Midlands, which would give local people free training and accreditation to join HS2.

The JV’s head of skills, employment, and education Shilpi Akbar said that there was a focus on reeling in unemployed candidates in the local area.

“We want everyone – particularly those who are currently unemployed – to join us and realise the wide range of benefits that can be derived from a career in the construction and infrastructure industry; careers that will take shape and flourish while working to deliver Britain’s new high-speed railway,” said Akbar.

The skills academy itself is located in Bordesley Green, which as per the Indices for Deprivation (IOD) for 2019, is the second most deprived ward in the city and in the top 10 per cent of deprived wards nationally.

West Midlands mayor Andy Street (pictured) visited the academy yesterday when the recruitment announcement was made.

He said: “One of the main reasons I fought so hard to secure HS2 for the West Midlands was the local jobs it would create and so it is brilliant to see that coming to fruition now.”

In November 2021, following the cancellation of HS2’s eastern leg between Birmingham and Leeds, HS2 submitted a new bill to parliament, to consider a £22bn western leg running from Crewe to Manchester.

Chief executive Mark Thurston said HS2 was already preparing to build up its presence in the north and that it was at the stage of carrying out environmental surveys. The bill remains with parliament at this time, and has been challenged formally by Manchester City Council.

The number of people working on the project is expected to peak at 30,000 in the next two years as the main civils work ramp up.