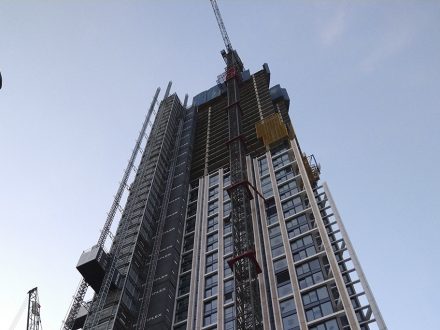 Construction workers at a troubled construction site in London have been fined thousands of pounds for holding a party while the country was in lockdown.

The six rule-breaking workers were found surrounded by empty beer bottles and celebrating St Patrick’s Day on site on 17 March last year, according to the Evening Standard. At the time, London was in a tier 4 lockdown, meaning people were told to stay at home, but could travel to work in sectors such as construction.

The party took place at the £900m One Nine Elms development, where Multiplex is the main contractor.

The project has since run into problems and all work is currently on pause. As revealed by Construction News earlier this year, workers walked off site in January after the scheme’s developer, China-based R&F Properties, failed to pay Multiplex what it was owed.

All six of the partyers were fined by the Metropolitan Police, but three failed to pay the fine, leading to a criminal prosecution at Westminster Magistrates’ Court this week, according to the London-based newspaper.

In a statement to the court, PC Holly Barker said a bar had been set up at the site, and that one of the six attendees was there dressed for St Patrick’s Day celebrations.

“It was clear he was intoxicated from the redness of the face, as well as the slurred speech,” she said.

Four other men and a woman were also partying at the site.

Gregory Vooght, who was fined £300, works as a quantity surveyor for Borough Engineering Services Ltd, which was contracted by Multiplex to work on River Tower, the smaller of the two skyscrapers that are being developed at One Nine Elms.

When complete, the 42-storey tower will contain a 173-room hotel and 109 residential apartments. The tower will be connected by a glazed bridge to the 56-storey City Tower, which will feature a mixture of retail space and apartments.

Vooght, Rebecca Horner and Kieran McDonnell were prosecuted for breaching the COVID rule that forbade gatherings of two or more people in a private place or indoors. Each of them was ordered to pay more than £450 in court costs, while Horner and McDonnell were also fined £569 and £440 respectively.

R&F owns a host of sites on Nine Elms, but has encountered substantial financial difficulties this year, with its Hong Kong subsidiary put into “selective default” when it agreed with its lenders to delay a $725m (£539m) debt repayment earlier this year.

Last month, the firm sold its Vauxhall Square site to Hong Kong-based developer Far East Consortium for £95.7m. The site had been empty following demolition work carried out by Keltbray in 2019, with R&F saying it would restart work when One Nine Elms and the nearby Thames City projects have been completed.