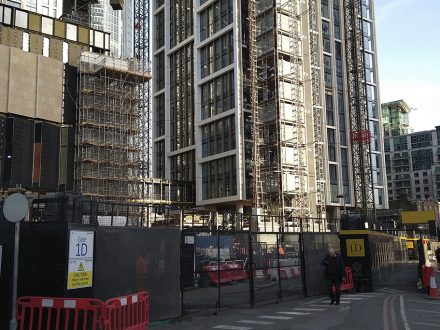 Multiplex has returned a full-capacity workforce to its One Nine Elms site in London after securing new investment.

Developer R&F has received £772m of funding from four separate lenders, according to ReactNews.

It would be the first time that the £900m site has returned to full capacity since January, when Construction News revealed that workers were leaving the site in their droves due to payment issues.

R&F has been beset with financial problems, forcing it to sell parts of its London property portfolio. Its Hong Kong subsidiary was put in “selective default” earlier this year, after it agreed with lenders to delay a $725m (£539m) debt repayment. At the time, the parent company’s credit rating had not changed, but credit rating agency S&P Global said it could still be cut.

R&F’s property portfolio on the coveted Nine Elms stretch of south London is now limited to One Nine Elms solely, after it sold two other properties to developers. In March, it lost about £60m after selling its Vauxhall Square site to Hong Kong-based developer Far East Consortium.

It followed that up by selling its 50 per cent stake in Thames City to partner CC Land in April for about £275m (2.66bn Hong Kong dollars). The developer said it lost about £190m through the transaction.

Last month, workers at the One Nine Elms site were fined thousands of pounds for holding a party while the UK was in lockdown in 2021. Five men and a woman were found celebrating St Patrick’s Day on site, where they had set up a bar.