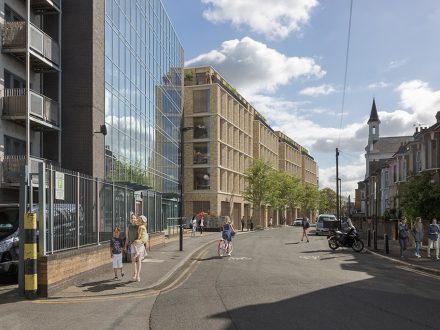 Contractor Watkin Jones has been given the green light to proceed with a 397-student housing scheme in London and a 778-home plot in Belfast.

The London scheme (pictured), located in Stratford, will include 397 student rooms and about 22,000 square feet of workspace for local businesses. Known as Grove Crescent, it will be built to BREEAM ‘excellent’ standard.

Watkin Jones announced in October that it bought the 1-acre brownfield site that had belonged to builders’ merchant Jewson, which had closed its unit in 2020.

Alex Pease, chief investment officer at Watkin Jones, said: “Student numbers are increasing across the UK and today’s very focused undergraduates want the best-quality accommodation to make the most of their time at university.”

The development adds to the contractor’s student-housing portfolio in Stratford, having completed the 511-room Eleanor Rosa House for the University of London in 2019.

Watkin Jones also saw progress earlier this week in regard to a planning application for a 778-room residential scheme in Belfast. The Loft Lines development on Queen’s Island was passed by Belfast City Council and work will begin this summer.

The contractor said it expects to finish the site – which will contain a mixture of build-to-rent and affordable homes – by August 2025.

Watkin Jones is expected to appoint a local contractor for the Belfast development. London-based Todd Architects designed the scheme.

Commenting on the Belfast scheme, Pease said: “Transforming this brownfield site into a thriving place will act as a catalyst for wider regeneration, and we’re very pleased to continue investing to support the people of Belfast’s ambitions.”

Build-to-rent homes have surged in popularity in recent years, with Watkin Jones chief executive Richard Simpson saying earlier this year that the booming sector had helped his company to double its profit last year.