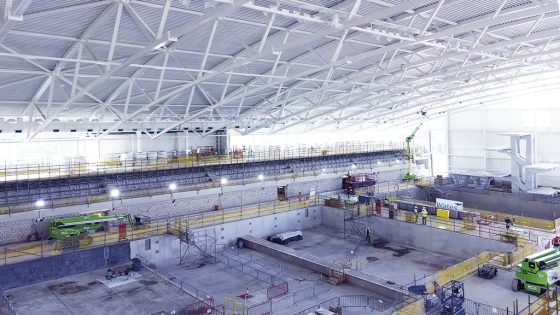 Now that the sporting circus has left town, Luke Haynes hears how a flagship venue is being renovated for use by local communities in the West Midlands

After international sporting events finish, purpose-built stadiums are often left neglected, without any plan having been made for their long term use. These white elephants are troublesome beasts: they’re not always fit for much beyond their original purpose. And they’re usually costly to convert.

Previously, the athletics stadium built for the 2012 London Olympic Games lay dormant for four years before Premier League football club West Ham United finally picked up the keys. But the cost of converting it for another sport was significant – a huge £320m sum was spent, largely funded by the taxpayer. Works on the stadium included the construction of a new cantilevered roof and the installation of retractable seating.

Last year, a report published by campaign group Engineers Against Poverty criticised how stadiums in the Brazilian cities of Manaus, Cuiabá, Natal and Brasília were left unoccupied following the 2014 FIFA World Cup.

However, Sandwell Aquatics Centre in Smethwick, west of Birmingham, was the only new venue constructed especially for this year’s Commonwealth Games. Organisers also sought to avoid it becoming a white elephant by developing an adaptable design and setting a goal of transforming it into a community venue. Costing £85m, the building – which hosted swimming and diving events during the summer – was kitted out with world-class facilities, including a 50-metre swimming pool and 10-metre-tall competitive diving tower. Five-thousand seats, of which 4,000 were temporary, surrounded the main aquatics room and were filled by excited spectators who took in some of the 66 medal events hosted by the centre, where the likes of diver Andrea Spendolini-Sirieix and swimmer Adam Peaty clinched gold medals for Team England.

Wates was the contractor that delivered the centre. Project director Paul Reynolds recalls the immense challenge of getting the venue ready for an “immovable” start. The first phase was focused on building facilities for the Games. In the second phase, Wates was responsible for facilities management and fit-out works. Phase three, now underway, is seeing it transformed into a community leisure centre, thoughtfully tailored to the needs of local residents. A gym, two four-court sports halls and a 600-person ‘changing village’ will all be assembled before the facility is handed back to the client, Sandwell Metropolitan Borough Council, next summer.

“The movable floor works in conjunction with hydraulic mechanisms installed in the wet duct with large metallic wires which, when contracted, lower the floor accordingly”

A temporary warm-up pool, located behind the main building, is to be dismantled to make room for parking for 300 vehicles, while a football pitch and children’s play area will be added, which will be operated by Sandwell Leisure Trust, a social enterprise that owns a string of facilities in the area. “It was very clear from very early on what we wanted to do with the aquatics centre so that we could create a lasting legacy after the Games,” says Lisa Cunningham, Wates’s preconstruction director for the Midlands. “That was something reflected in the design team that we appointed and the people we brought in to work on the project.

“We didn’t appoint an architect that was trying to recreate a grand Olympic arena – we got in someone that understood how the community would use it after the Games, and then the Commonwealth requirements went beside that. Community use of the venue was always the final goal.”

A prime example of the approach is the Olympic-sized swimming pool’s adaptable features: a movable floor and movable booms allow the length and depth of the pool to be adjusted. This means it can be divided into separate sections or mini-pools; users of different abilities may then be able to use it at the same time.

Wates senior project manager Taz Razzaq says: “The booms are made from a high-density plastic and measure 25 metres wide and 1.5 metres deep. To move them, we fill the pipework inside the boom with air – allowing the boom to become a float. It is then pushed into position through a battery-operated pulley trolley, made from a combination of non-corrosive aluminium and high-density plastic.

“The movable floor works in conjunction with hydraulic mechanisms installed in the wet duct with large metallic wires which, when contracted, lower the floor.”

Razzaq adds that 50 per cent of the pool floor is movable, with a structural plinth separating the two halves. The booms can be pushed across to sit at the end of the floor or on the plinth to create three separate section floors. This will allow the leisure centre to run multiple classes for all age ranges in the community and provide three revenue streams during a single session of swimming.

Ironically for a swimming-pool job, a high water table caused one of the major challenges on the build’s first phase. Extensive site constraints included a large foul-water sewer diversion, poor ground conditions and a 10-metre slant across the site. The ground beneath the aquatics centre consists of an ash and inert subsoil material, above a non-porous layer of clay. This meant that the ground had perched water within it.

Due to the wet conditions, a complex dewatering scheme had to be implemented to remove the saturation and perched water, and to allow for safe excavations. The dewatering system utilised replenishing wells to get around discharge limitations, and cement stabilisation. Piled foundations were also adopted to improve the ground. A split-level design within the building was also adopted because it worked well with the existing site levels.

Structural engineers Arup had to follow a very specific design for the ‘pool tanks’, the skeleton of the swimming and diving pools, which involved pouring the floor and walls in small sections – starting from the centre of each pool and working outward. An adjoining slab could only be poured after a seven-day curing process and adjoining walls within four days. The dimensional accuracy of the length of the 50-metre Olympic-sized pool was critical, with international swimming competition rules only allowing tolerances of up to 10mm over size, and 0mm under.

The concrete for the pool tank was a C40 mix, and water retaining rather than waterproof, while approximately 1,500 tonnes of reinforcement was installed across the project. All formwork was either traditional, doka or peri.

In addition, piled foundations were designed both in compression and in tension to the structure to resist hydrostatic uplift resulting from the high groundwater when empty due to the high water table. In total, more than 200 piles had to be used across the project to create a tie-down structure to resist hydraulic uplift. Tension piles were also constructed at 750mm diameter – reaching an approximate depth of 20 metres.

Major work is now underway to remove the 4,000 seats used during the Games to make room for two large sports halls. Workers from Swiss temporary and specialist structure contractor Nussli are taking down rows of temporary seating positioned adjacent to the pool, before a 96-metre-long and 20-metre-high separating wall is installed to isolate the pool area. While the high water table was one of the more complex technical challenges of the first phase of construction, the wall presents its own challenges around working at height, Razzaq says.

While all of the medals may have been handed out, there is hope among those involved in the project that the Sandwell Aquatics Centre will help to generate the next crop of star athletes, thanks to its world-class facilities that will now be accessible to young people and coaches in the area and further away. Razzaq says coaches from around the country are already visiting the centre to see what it will have to offer.

Reynolds, who has been employed in the industry for more than three decades, says: “I’ve probably never worked on a project where I’ve ever had so much positive feedback. It does make you feel immensely proud, the fact that you look at everything that’s going on in a positive nature in Birmingham at the moment.