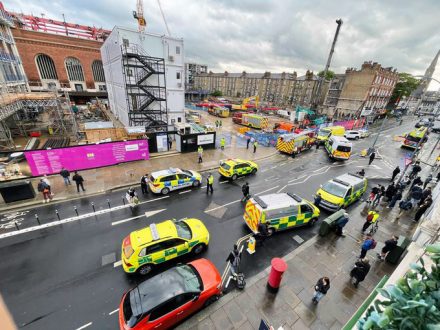 The incident, which occurred on Wednesday afternoon, saw police and fire crews rush to the scene on King Street, along with an air ambulance, after a large section of scaffolding collapsed.

According to the Met Police, the injuries are considered to be non-life threatening.

A spokesperson for Hammersmith & Fulham Council confirmed that the collapse occurred at the site of the new Civic Campus for the borough, which is being delivered by Ardmore as part of a joint venture with the council.

A spokesperson for Ardmore said it was co-operating fully with relevant authorities, but had no further comment on the incident at this time.

“The Brigade was called at 17.42 and the incident was over for firefighters by 18.32. Two fire engines from Hammersmith Fire Station, a turntable ladder from Paddington Fire Station and a fire rescue unit from Chelsea Fire Station attended the scene.”

In a statement, Hammersmith & Fulham Council said: “We are sorry to report there has been an accident on the Civic Campus construction site. The site is currently not under H&F’s control (it is managed and operated by the construction company), so it is hard to glean exact information.

“We understand there are currently two injuries. The London Ambulance Service and London Fire Brigade are on the scene. Road closures are in place along King Street.

“Our thoughts are with those injured, their colleagues, friends and family. Further updates to follow.”