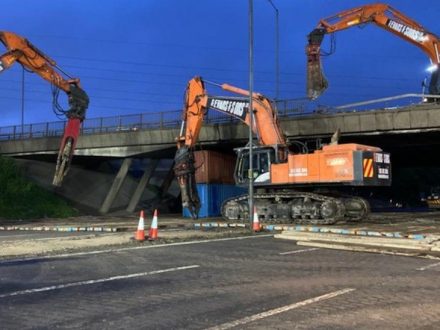 A bridge carrying traffic over the M6 for half a century was torn down in under 48 hours.

Time lapse footage released by National Highways shows the fast removal of a bridge spanning the M6 at junction 10. Work finished in the early hours of yesterday morning, more than four hours ahead of schedule.

The bridge – which has carried traffic over the M6 for some 50 years – has been replaced by a more modern and wider, four-lane structure to tackle congestion at the busy junction.

National Highways and Walsall Council, supported by the Black Country Local Enterprise Partnership, have joined forces to fund the £78m upgrade of the junction.

Contractor John Sisk & Son has been hard at work on the project since late 2019, and was hailed at the end of 2021 for its spotless safety record on the scheme, having completed 500,000 work hours without a single of the 100-strong workforce taking time off through injury.

Junction 10 was closed from Friday night until 1.30am on Monday morning to enable the south bridge to be removed. A fleet of machines swept on to the site to ‘nibble’ away the bridge before the road was cleared and then reopened to traffic.

“Demolishing a bridge of this size is a complex operation but everything went exactly to plan and we were delighted that we were able to get the motorway open several hours earlier than planned,” she said.

“A big thank-you to everyone who was able to avoid the area where possible as it helped us reduce the queues of traffic and delays to journeys. We appreciate that closing the motorway does cause some inconvenience and only do so when we absolutely necessary to protect our workforce and road users.

“Road users will soon be able to enjoy the full benefits of the improvements to the junction which will help combat the traffic hold-ups endured at this bottleneck for many years.”

The existing north bridge is also due to be demolished within a few weeks.

The two new bridges were built alongside existing ones and will double the number of traffic lanes around the junction from two to four.

John Sisk & Son was appointed as main contractor in 2019 and work is due to be completed this summer.