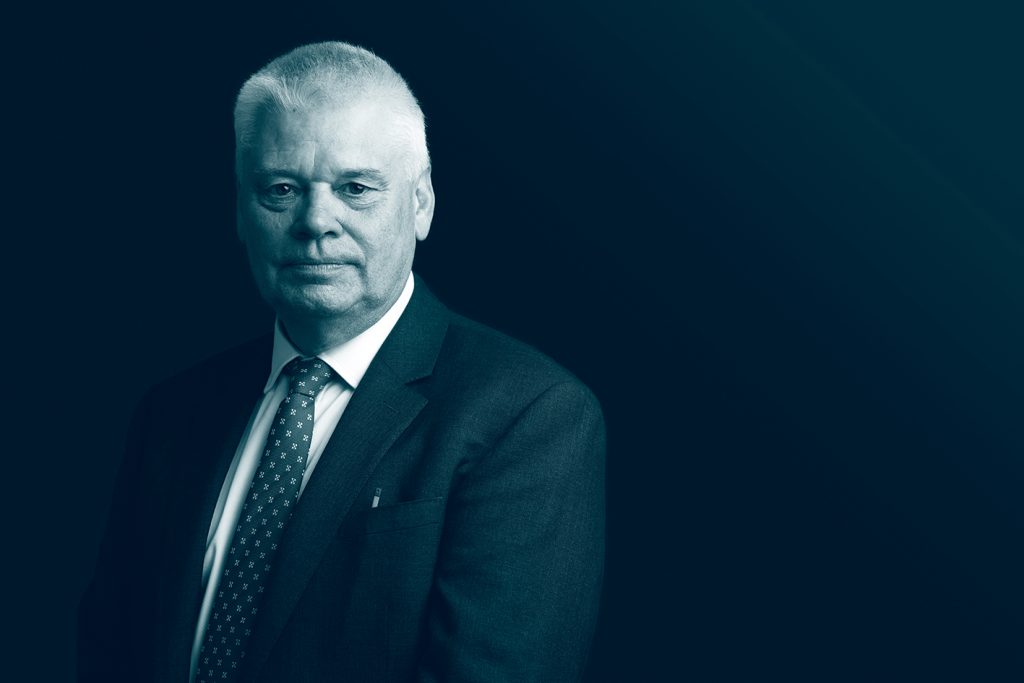 Paul Gandy, chief executive of Tilbury Douglas, exclusively tells Colin Marrs that his firm is back on track after the turbulence surrounding its time as part of Interserve Group

Paul Gandy relishes a challenge. Three years ago he became managing director at Interserve Construction, the contracting arm of Interserve Group, at the time preparing to break itself up through a pre-pack administration. He arrived battle hardened from a role at Kier, which was also suffering financially.

Over the past three years Gandy has overseen the rebirth of Interserve’s construction operation under its historical name of Tilbury Douglas, and became chief executive. He has since helped conduct (ultimately aborted) buyout negotiations with his former employer, before working on the separation of the firm from its parent, which completed in May. And that’s without mentioning his role keeping the firm afloat during COVID-19.

I meet Gandy in the firm’s smart, but modest, office in the City of London for an exclusive first media interview since those changes. He tells Construction News that there are two types of people at the top of construction firms. “There are those who do well managing the status quo and there are those who like to face into a challenge.” He puts himself firmly in the second camp: “My chair always tells me: ‘You like to walk towards the sound of gunfire’.”

Things could have looked very different for Tilbury Douglas had the buyout talks not broken down in March 2022. Gandy was not privy to the reasons Kier pulled out of the mooted deal, but offers his theory. “We all got on very well. My view is that the businesses are too similar and there is too much overlap in the regional businesses. We are on all the same frameworks working in the same parts of the country. It’s hard to see how you could capture all of that work and value by bringing them together.”

Despite its failure, Gandy has no regrets about embarking on the process. “When people ask you questions of your business through the M&A process and all the diligence that goes with it, you’re inevitably going to learn stuff. It’s a massive diversion as well – anyone will tell you that – but we treated it as an opportunity.”

By the time the discussions ended, Gandy had already persuaded Interserve’s shareholders that there was a valuable future in their construction arm. Within three months the company was separated from its parent, albeit owned by the same shareholders. The separation leaves Tilbury Douglas, Gandy says, with “pure opportunity”.

The business remains focused on its traditional areas of construction – health, education, highways and water. Gandy says it has broadened out a little in the past year, taking on jobs in the airports sector, research and development, and manufacturing. But there is no escaping the cold, hard numbers. This is a firm that has shrunk from a turnover of more than £1bn (as Interserve Construction) in 2017 to just £372m in its most recent set of accounts for 2020.

Sticking to the knitting

As well as exiting its loss-making energy from waste (EfW) sector, the firm has left the London residential market. “It was a problem”, Gandy says of the latter. “Your people have to live it and breathe it. No sector in construction is something you should play with. We’re not geared up to be a big residential contractor. Our business plan boils down to ‘sticking to our knitting’.”

This neat description of Tilbury Douglas’s new strategy is the polar opposite of the one that guided its former parent company, Interserve. That firm was founded in 2002, to reflect the bold move by Tilbury Douglas’s former self into maintenance and facilities management (FM). This ambitious expansion was in tune with the prevailing trend for a ‘whole-life approach’ to buildings, embodied by the private finance initiative that brought Interserve a whole new pipeline of jobs.

While that was well before Gandy joined the company, he admits to having been a fan of the whole-life approach. “I believed in it,” he says. However, he sees things very differently in retrospect. “Conceptually it is a strong argument but, practically, it becomes difficult engineering the contract, procurement and payment.”

The clash in cultures between traditionally separate industries proved insurmountable. “I have worked in the FM world,” he says. “There is a massive cultural difference with construction. Even when we were integrating those things through PFI [private finance initiative], they were very different. While they might collaborate, they were essentially different bodies, with all the frictions between them.”

But it was another area of expansion that finally proved the undoing of Interserve. In the same week in January 2018 that another construction and FM firm, Carillion, collapsed, Interserve warned that its debt was set to top £513m, largely due to problems with its EfW projects. More bad news emerged from its jobs in that sector, prompting a share-price collapse that ultimately led to the restructuring of the Interserve business and the rebirth of the Tilbury Douglas brand.

Again, this was before Gandy’s time, but he says the problem with EfW plants is “generic” for traditional construction firms. “I can list you endless major contractors who’ve lost fortunes in EfW. The issue is just your ability to stand that loss. I’m not saying that somebody can’t do it successfully, I’m sure someone will say they do. And that’s great because that’s their knitting.”

Tilbury Douglas has been out of the EfW game for some time, so Gandy can state with confidence that there are no remaining liabilities in the segment. However, the firm is still not clear of all of the legacy financial issues. In August, CN revealed that Northumbrian Water is seeking more than £22m from Tilbury Douglas (a sum outstripping its 2020 profit by £7m) and a joint venture partner in a dispute over a delayed water treatment plant. Gandy won’t be drawn on specifics. But the first two words of his assertion that the firm is “pretty much at the end of all that stuff” seems to be doing some heavy lifting.

Professionally, Gandy has been around long enough to remember more than one recession, having started his career in 1980, shortly after the ‘winter of discontent’. In the early 1990s he relocated to Portugal due to the impact of another serious downturn. He is yet to be convinced that the current situation is comparable. “That [the 1990s recession] was the hardest one of all, because it was driven by property fundamentally. Everything stopped dead and stayed stopped for seven, eight, nine years. It was a difficult time.”

However, Gandy believes his firm is well insulated, with a £1.05bn order book and an average job size of under £10m. “It’s quite granular. If we have a problem on a job, it’s a relatively small issue. If your business is doing 10 major projects and just one of them goes bad, it’s a big one.” He also cites the company’s regional structure as a buffer against the impact of post-Brexit labour shortages. “[Leaving the European Union] has probably hit major projects in the major conurbations a lot more and had less of an impact within the regions. We’re a regional business that operates nationally – our supply chain is, by and large, a regional supply chain that is less dependent on Eastern European workers.”

Materials shortages and energy price inflation present the biggest risks, Gandy says. “They are unprecedented. After the pandemic, all the suppliers are running at partial capacity,” he says. And the travails of sterling provide another headache. “We shouldn’t underestimate that – all global transport is essentially done in dollars. And pretty much all energy is in dollars – all our materials and products are energy intensive.”

Due to these factors, many clients are considering a period of consolidation, Gandy says. “We’re finding it harder to get the budgets to work for the customers. We get there, but it takes time. In the private sector, the chances are you might say ‘Let’s have a time-out for a year’.” But he believes his firm’s work in the public sector provides another layer of protection. “If you need a hospital extension, you need a hospital extension. So you’ll get to a solution.”

A degree of standardisation in design also helps, Gandy says. “We have a pretty standard schools solution, which we refine all the time. It’s not one-size-fits-all. In some parts of the business we tend to build schools in steel frame, while in other parts will build them in concrete. That’s what works for them locally with their supply chain and their experience. But when you go inside that school, how we put the classroom together, how we do the ventilation, the air conditioning, the lighting, the bathroom? Actually, that’s pretty much standard.”

The firm is also harnessing digital technology to help reduce risks. Last month it launched a virtual reality tool to help customers visualise the end product at the outset of the design process. The tool has been developed in conjunction with a gaming software company. “Our director for engineering went to a gaming company because he said ‘we’ve got to go to people who react fast’.”

Gandy clearly thrives on tackling the complex problems he faces in his job. Outside of work, he has chosen hobbies that are no less demanding. Motorbikes are his passion – rebuilding them and touring with friends from all walks of life on the Continent three times a year. He also took up flying mid-career as a way to escape the day-to-day stresses involved in a senior construction role. Piloting his firm through the current turbulence is likely to prove a less-relaxing experience.

During a career spanning more than 40 years, Gandy has worked in senior roles at some of the UK’s biggest contractors. He started his career at Trafalgar House, and rose through the ranks over the next 20 years, remaining after the firm was subsumed by Kvaerner Construction (now Skanka) in 1996.