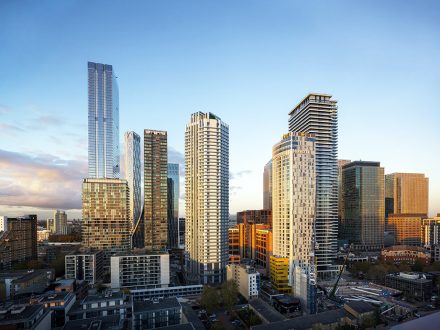 The project is likely to be the UK’s tallest modular tower, at 159 metres high, and will see the construction of more than 1,000 student beds with enhanced public realm, including a roof garden.

Another of the company’s projects, the 101 George Street development in Croydon, which features two towers of 38 and 44 storeys, respectively, was believed to be the tallest structure of its type, at 135 metres. But the Canary Wharf scheme, designed by EPR Architects, is set to snatch the title.

Public realm around the new project will be improved. A public path will be constructed between Cuba Street and Marsh Wall, while a small recreational space, or ‘pocket park’, will also be created.

The status update for the project, which won approval from Tower Hamlets Council in April, comes as Tide clinched full approval for its plans.

Tide will act as the scheme’s developer and contractor, and will construct the building with precision-made modules made by its sister company, Vision Modular Systems.

The method will help to make construction greener by reducing embodied-carbon emissions by up to 45 per cent, according to the firm, which said the approach also cuts construction time by up to 50 per cent.

Tide Construction chairman John Fleming said: “This landmark scheme bolsters our portfolio of major schemes in London, further strengthening Tide and Vision’s roles in revolutionising the way in which homes are delivered in the UK.

“This scheme will further demonstrate the power of modular to deliver buildings of the highest architectural quality with world-leading engineering. Thanks to sustained year-on-year growth in delivery and pipeline, Tide and Vision Modular will continue to develop and build institutional-grade buildings that confirm volumetric modular as a mainstream method of construction.”

The development bolsters the firm’s pipeline of projects being built or at the planning stage, with more than 3,000 homes under construction.

It has also delivered a significant portfolio of modular developments for institutional investors and partners in the UK across a range of areas, including housing, hotels and purpose-built student accommodation.