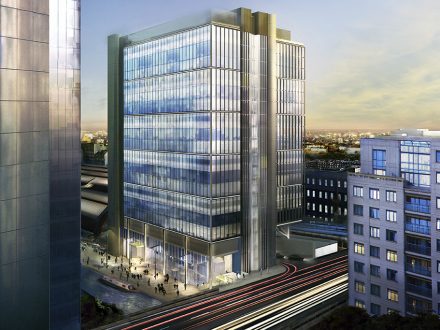 Transport for London (TfL) is searching for a joint-venture partner to help develop three commercial office schemes above its stations at Bank, Paddington and Southwark.

The developments, which form part of its commercial programme, aim to deliver up to 595,000 square foot of office space across the three sites.

The Bank over-station development would be sited above the new station entrance on Cannon Street. TfL is looking to build an eight-storey building, along with a basement, retail space and 140,000 square foot of office space.

At Paddington, the transport body is looking to build a 19-storey tower close to the Grand Union Canal and near the new Elizabeth line. The development would include 235,000 square foot of space and feature a canal-side reception area.

In Southwark, the over-station development above Southwark Tube would be a hybrid timber building of up to 17 storeys high. TfL wants it to be one of the “greenest and healthiest large-scale commercial buildings in the UK”. It would include a 220,000-square-foot, mixed-use development featuring office and retail space.

TfL head of property development Scott Anderson said: “We are delighted to be going to the property industry with this exciting opportunity, and are looking for a partner to create best-in-class commercial office workspaces that will positively transform the capital and support its green recovery.

“This new investment and development partnership will form part of our wider commercial development programme, which seeks to build the homes and commercial spaces the city needs, while also generating vital revenue that reduces TfL’s reliance on fare income.”

This partnership forms part of TfL’s wider commercial development programme, which, alongside new commercial office developments, will see thousands of high-quality new homes built on its land across the capital – delivering 50 per cent affordable housing on average across its entire portfolio.

TfL currently has more than 1,700 homes under construction, with work forecast to begin this financial year on 12 additional sites that will deliver a further 2,400 homes.