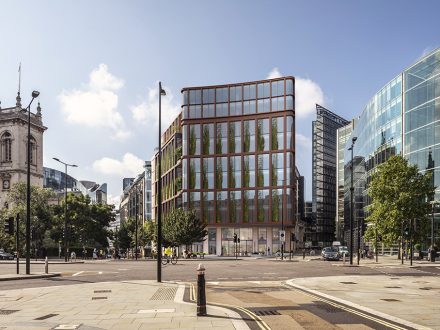 A job to develop a 12,000-square-metre office block in London has received the go-ahead.

The ten-storey office site, which will include retail options on the ground floor, will move forward after the City of London Corporation approved plans on Friday.

It had not provided the value of the project at the time of publication, but construction intelligence provider Glenigan puts it at £173m.

The job involves demolishing the current on-site building. Also included in the plan is the development of an 840-square-foot park space and a cycle parking station.

According to the City of London Corporation, the BREEAM pre-assessment suggests the development is on track to achieve a sustainability rating of “outstanding”.

The new building was designed by WilkinsonEyre.

Chairman of the City of London Corporation’s planning and transportation committee Shravan Joshi said: “Schemes that deliver a vibrant public realm, alongside office space that meets the needs of a modern workforce, will continue to draw people back into the city as our recovery gathers pace.”

It is the latest office development in London to get the go-ahead, as plans ramp up for sustainable work space in the capital. In March, Skanska scooped a £235m job to build an “ultra-sustainable” office-led scheme in central London.

In May, Lendlease took on a £120m contract to retrofit an eight-storey building into 240,000 square feet of office space in Covent Garden. At least 80 per cent of the existing building will be retained to reduce the project’s embodied carbon.