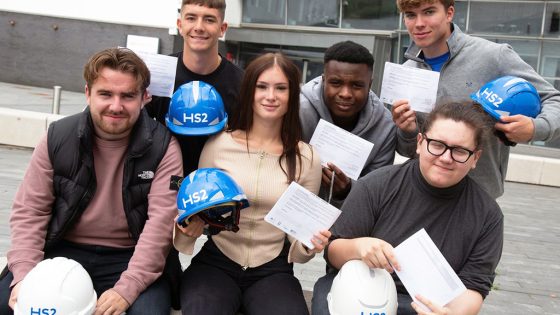 A group of T Level graduates from Walsall have secured jobs on mega-rail project HS2, after receiving their results yesterday, while students in other areas have been hired by Willmott Dixon.

Sixteen students took up placements with Balfour Beatty Vinci (BBV), HS2’s construction partner for the West Midlands, two years ago, as part of a collaboration with Walsall College.

The partnership saw students take part in a 45-day placement with HS2 as part of their Design, Surveying and Planning course – one of three construction-related T Levels on offer – and this accounted for 20 per cent of their overall grade.

Yesterday, the group of 16 discovered they had all passed the placement and theory elements of their training, allowing them to progress with the next stage of their career.

Six have gone on to secure apprenticeship roles with BBV and will spend the next five years advancing their studies while earning a wage.

Further interviews are being held over the next two weeks in the hope of more T Level graduates joining the construction team behind part of the UK’s new railway.

Leah’s new role will see her work alongside the team building the Delta Junction – one of the most complex pieces of infrastructure on the HS2 route.

Reflecting on the course, she said: “The industry placement has been invaluable. The blend of studying at college and gaining work-based experience on a project like HS2 is definitely the best way to learn. I’m only 18, and already have two years’ experience on my CV, which will really help me to stand out.

“I’m really looking forward to meeting the team I’ll be working with and starting my new career as a quantity surveyor.”

In results announced by the government yesterday, 93.7 per cent of students taking the Design, Surveying and Planning for Construction T Level achieved a ‘Pass’ or above. This was the highest pass rate among all T Level subjects.

Overall, 92.2 per cent of the more than 1,000 T Level students who took part in the two-year programme achieved a ‘Pass’ or above.

The three construction-related T Levels include:

Head of stakeholders and communities at Balfour Beatty Vinci Shilpi Akbar said: “We’re looking forward to welcoming six new apprentices from Walsall College in the coming weeks, who will bring new ideas and fresh ways of working with them.

“Each apprentice will take up roles across the business, which will be absolutely critical in delivering HS2. This is just the start of a fantastic partnership with the college, which will provide further employment opportunities and development for students in the region.”

Several T Level students have also secured places on Willmott Dixon’s management trainee programme, following placements at the contractor, according to a manager at the firm.

She said: “Well done to everyone involved. This paves the way for T Levels to go from strength to strength, providing practical and knowledge-based learning at a school or college, and on-the-job experience.”

Wiltshire added that the qualification was a win-win for both students and contractors.

T Levels were launched by the government in 2020, with the intention of attracting more young people into construction and similar fields. The educational Level 3 qualification can be taken after students complete their GCSEs and is the equivalent of three A Levels.