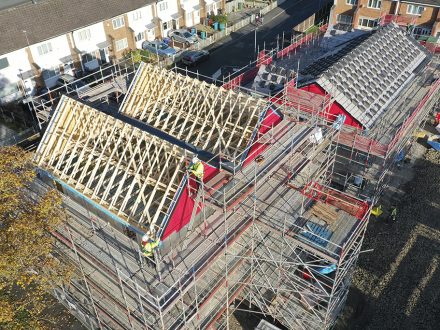 There are positive signs in this week’s data round-up, with material sales rising and starts increasing on site. Inflation continues to dominate analysis of the sector, however, and there are worrying signs for housebuilders. Also, have you asked for a pay rise yet?

Demand for construction materials rose in the first three months of this year, according to research by the Construction Products Association (CPA).

However, the CPA noted official data highlighting that materials prices rose by almost 22 per cent in the first three months of this year. As such, materials were the primary driver of cost inflation for all product manufacturers, despite reports of surging fuel and energy costs.

Glenigan: more projects get under way

The value of underlying starts on site was up by almost 10 per cent in the latest period analysed by industry intelligence unit Glenigan.

Data showed the amount of work getting under way in the three months to the end of May was almost a tenth higher than in the previous rolling quarter, after adjusting for seasonal fluctuations and removing individual projects worth more than £100m.

But Glenigan has called for “cautious optimism” when analysing the results. It noted material and labour shortages, in addition to rampant inflation, were delaying projects.

“While the outlook looks decidedly more positive than in recent months, there is still some way to go before the sector returns to the levels of growth seen in spring/summer 2021,” said the data firm.

The closely-watched housebuilding index produced by the Chartered Institute of Procurement and Supply (CIPS) registered 50.7 in May 2022 – its lowest level since May 2020. Although residential construction activity has been on the rise for 24 consecutive months, the latest reading shows it has almost levelled off in recent weeks.

Non-residential building growth remained strong last month, with an index reading of 59.8 in May, while civil engineering activity increased for the fifth month running, this time at a score of 55.5. Although three in four purchasing managers saw price rises in May, as inflation remained rampant, delays in receiving materials were at their least widespread since February 2020.

Some firms noted an improvement in the availability of construction items, despite ongoing challenges that included logistics bottlenecks, Brexit trade frictions and supplier staff shortages.

Three-quarters of construction employees have considered asking for a pay rise due to the cost-of-living crisis, according to a poll by personal finance experts Forbes Advisor.

The survey of more than 5,000 UK adults across all sectors discovered that one in seven workers in the construction industry actually went ahead and requested higher wages. And just over a third of those who took the plunge were rewarded with better pay – the third-highest level across all industries included in the poll.

However, only 3 per cent of construction employers volunteered to give staff a salary boost. Across all sectors, those aged 35-44 were most likely to ask for more money, while those aged 55 and over were least likely. The North East saw the most pay requests and the South West the fewest.