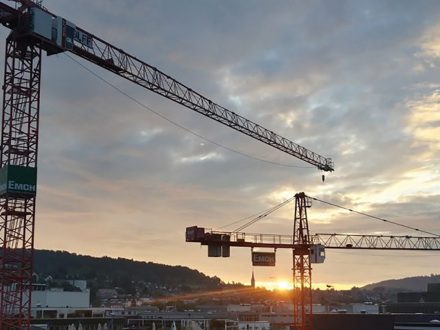 The impact of global shocks, such as the COVID-19 pandemic and the ongoing war in Ukraine, feature heavily in our round-up of this week’s construction data, but there is positive news for council housebuilding in London and future office investment.

Industry insights firm Glenigan reports that the value of schemes commencing on site was 17 per cent lower in the three months to the end of April 2022 than in the prior three months. Taking a longer-term view, the figure was a third lower than the corresponding period a year earlier.

Big projects – those with an individual value in excess of £100m – were down two-thirds both against the prior period and the previous year.

Glenigan said groundbreaking was being “significantly hindered by mounting inflationary pressures and dwindling consumer confidence”. Indeed, it noted that project starts were at their lowest level since the UK’s first Covid-19 lockdown.

Accenture has a stark warning about the macro-impact of recent events, estimating that the pandemic and Russia’s invasion of Ukraine could cost the Eurozone €920bn (£780bn) by the end of next year.

The consultancy said in a report that supply chain disruption related to COVID-19 cost economies in the region more than €100bn in lost GDP in 2021.

A lack of materials, breakdowns in logistics chains and inflationary pressures were already undermining the rebound before the war in the east of the continent “aggravated the situation”, said Accenture.

Earlier this week, brick supplier Forterra said it had delayed the start of its Wilnecote factory refurbishment “in response to the global supply-chain issues”.

Skills shortages are holding back attempts to digitise construction processes, hampering efforts to use modern technology to tackle major challenges such as climate change, the Royal Institution of Chartered Surveyors (RICS) has found.

The body surveyed more than 2,500 members and found that nine in 10 believed a lack of professionals with the right talents was a medium or high level “blocker” to their aspiration of switching to advanced practices. This made skills the second biggest obstacle to transformation, behind only the cost of technology, such as building information modelling and digital twins.

Just one in five respondents said they used data and technology to help measure carbon footprint on all or most of their projects.

Construction of almost 5,000 council homes started on site in the capital in the year to April 2022 – the highest number for more than 40 years – according to the Greater London Authority.

The mayor-led body said building had got underway of 4,946 residences backed by City Hall in the last financial year, the largest volume since 1979.

Bromley, Hammersmith and Fulham, Kingston upon Thames and Sutton all started building City Hall-funded council homes for the first time last year, while all but all two councils in the capital started work on new projects of this nature.

The volume of new office construction work in the capital fell to just 213,000 square metres in the six months to the end of March 2022, Deloitte’s London Crane Survey reported.

Even this reduced amount – a third down from the previous winter and the lowest level for three years – was dominated by refurbishment works, with just five new build schemes getting underway in the latest period.

Only the midtown district, which includes Holborn and St Paul’s, saw a rise in office project starts in the six months to March 2022. There is optimism for the summer, however, with 250,000 square metres of planned office buildings in demolition phase and scheduled to start by September.

The contractor, which commissioned the Centre for Economics and Business Research to carry out the study, claimed its findings showed “predictions of the death of the office were misplaced”.

A survey of more than 1,300 employers, employees and investors revealed that almost half of businesses making improvements to their workspaces believed they had made recruitment easier. More than half of employees polled did not want to work remotely on a permanent basis.