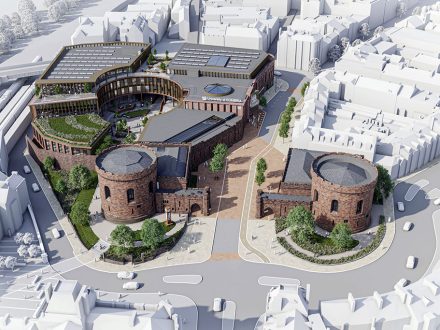 Planning permission for a new £77.5m University of Cumbria campus, led by Sir Robert McAlpine, has been granted.

Plans for the Carlisle Citadel project, which will include work to retain two Grade I-listed citadel rotundas, along with other heritage structures, such as the Woolworths and Burton’s buildings, were approved by Carlisle City Council last week.

New facilities included in the project are a multi-purpose, 200-seater lecture theatre, a café, space for exhibitions and the Carlisle Business Exchange centre.

A brand-new medical school, jointly run by Imperial College, will also be built. The campus will be split into two separate areas, divided by English Street.

A total of £50m is being provided by the Department for Levelling Up, Housing and Communities, and £4m is being given by the Carlisle Town Deal Fund.

Cumbria University will provide the remaining £23.5m in construction costs. It is one of the development partners, along with Cumbria County Council, Carlisle City Council and Cumbria Local Enterprise Partnership.

University of Cumbria’s strategic lead on the project, chief operating officer David Chesser, said: “The decision to grant planning permission is really exciting for the university and the region as a whole.

“The historic nature of the site does present us with challenges, but we feel its uniqueness gives us the opportunity to bring back to life some incredible heritage assets, alongside new digitally-enabled flexible teaching and academic facilities.”

He confirmed that lead contractor Sir Robert McAlpine will begin site preparation work later this year, and will cover archaeological investigations and other construction-related survey work.

The main construction work is scheduled to start in the first half of 2023, with delivery set for spring 2026.

In November 2021, a £40m extension to West Cumberland hospital, contracted to Graham, was given the green light.