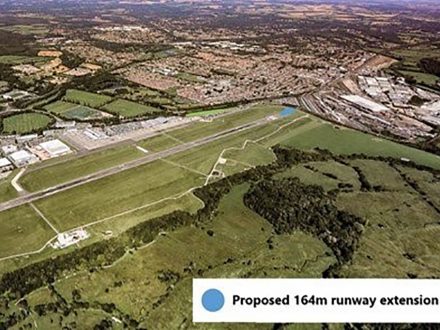 A legal challenge mounted against the expansion of Southampton Airport has been thrown out by a High Court judge.

Justice Holgate has ruled that Eastleigh Borough Council’s decision to grant planning permission for a runway extension at Southampton Airport was not unlawful and therefore will not undergo a judicial review.

The airport planned for a 164m runway extension, an associated blast screen, and the reconfiguration and enlargement of the existing long-stay car park to add 600 spaces. It said this was “absolutely critical to [its] viability as a regional airport” as the current runway is not suitable for modern airline fleets. The plan was approved by Eastleigh Borough Council in April 2021.

Shortly after, the protest group GOESA Ltd (Group Opposing the Expansion of Southampton Airport) was created and, with the backing of almost £30,000 donated by locals, it filed for a judicial review of the decision, calling it unlawful.

The High Court initially rejected the campaign group’s claim, but GOESA took the opportunity to have the application renewed in open court. Following an oral hearing in December 2021, permission was granted for a judicial review hearing.

The case was heard last month and GOESA argued that the decision was unlawful on five grounds:

Justice Holgate has now ruled against the protest group on all five grounds. However, GOESA is going to talk to its legal counsel, Leigh Day, and consider appealing the decision.

GOESA spokesperson John Lauwerys told NCE: “Obviously, we’re very disappointed in the judgement and rather surprised because we felt we had a strong case. We had been allowed by the previous judge to proceed with a number of the grounds that we had argued in the judicial review application, so it was disappointing that in the hearing they were unsuccessful.

“We are at the moment taking advice from our legal team and considering an appeal. We have to consider the cost, because all of this is being funded by local people, who are dismayed by the extension proposals of Southampton Airport. It’s going to cause additional noise disturbance to some 46,000 people adjacent to the airport, which is horrendous.

“What the airport wants to do is increase the number of passengers by 2034, but that doesn’t seem to be in line with what we should be doing in terms of climate change, and it’s not in line with what the Climate Change Committee said.”

A spokesperson for Southampton Airport said: “Southampton Airport welcomes the court’s decision, which finds that Eastleigh Borough Council’s approval of our crucial plans to extend the northern end of our runway by 164m was lawful.

“The court’s judgement is an exciting step forward for Southampton Airport, as it will allow us to progress our much-needed runway plans, provide certainty to our staff and play a full part in the emerging Solent Freeport.

“The extension will secure the airport’s long-term viability and deliver significant economic benefits to the region, not least the creation of much-needed new jobs, including employment opportunities during the construction phase.

“We would like to thank all those who have supported our runway plans over the last few years, particularly the residents and businesses who registered their support during the planning process. We appreciate, however, that some of our neighbours have concerns regarding noise and the environment. As an airport, we want to work with residents and stakeholders to manage and mitigate these concerns going forward.”