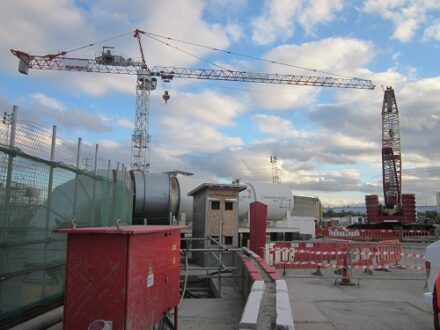 Construction output is forecast to slow down in the medium term and long term, despite high output levels this year.

The Construction Products Association (CPA), which represents manufacturers and suppliers in the industry, predicted that output is forecast to rise by 2.5% in 2022 and 1.6% in 2023.

This slowdown will come as a result of the expected contraction of the UK economy in Q4 of this year.

CPA economics director Noble Francis explained: “During the next 12 months, the rapidly rising cost of living, slowdown in economic growth and falls in consumer confidence and spending will undoubtedly affect private construction investment. In addition, rising labour and materials prices are likely to mean that the industry sees the value of output previously expected, but not the volume.”

Work will continue to pick up in the short term, particularly in the industrial sector. The building of factories and warehouses is expected to jump by 15 per cent in 2022 and 9.8 per cent in 2023. This can be traced to the rise of online retailing, which requires more storage spaces, as well as supply chain issues.

Second to industrial work is infrastructure activity, which is set to grow by 8.5% this year and 3.8% in 2023, thanks to large-scale projects such as HS2, Hinkley Point C and Thames Tideway and their stretched timescales. The CPA warned that local infrastructure and central government projects will decline as the government struggles with finances beyond the November 2021 Spending Review.

Private housing is expected to rise by a little – 1 per cent – this year and flatten next year. Housebuilders should brace for a crash in demand for houses in the long term and for material price inflation, labour shortages and building regulations in the short term.

The repair and maintenance of private housing, which is currently above pre-pandemic levels, is expected to be worst affected by material price inflation, as subcontractors will be unable to plan ahead for projects in a volatile market. Output is likely to decline, with a predicted 3 per cent fall this year, rising to 4 per cent next year. The CPA added that, given how high output has been in housing repairs, it may “fall harder” than predicted.

Francis concluded: “Construction is not immune to the effects of the wider economy.”

Construction output reached a record high in May, when it rose by 1.5 per cent, mostly as a result of new commercial work. Annual output for construction grew by 12.7 per cent in 2021, as shown by data from the Office for National Statistics.