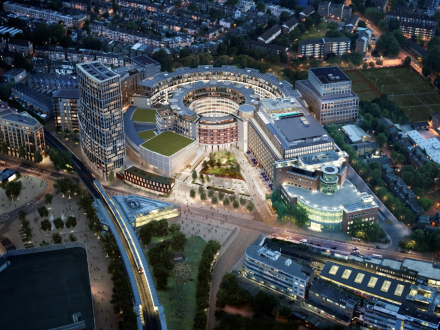 Work on the second phase of the £500m redevelopment of the BBC Television Centre in West London is due to begin.

Phase two of construction work at the White City location will see a total of 511 homes built on four separate plots, including a modern, crescent-shaped block of 180 apartments and a 25-storey building containing a further 167 apartments. A pedestrian connection through to Hammersmith Park will also be added.

Designed by lead architects AHMM, the buildings will be “distinctive and have a character of their own”.

A completion date of 2026 has been set by development managers Mitsui Fudosan and Stanhope, which have yet to name the main construction partner. They appointed Mace to lead phase one of the redevelopment, which has a total end value of £500m.

Stanhope property and commercial director Jonathan Trout said: “We are delighted to be working with Mitsui Fudosan as development manager for the delivery of a new, residential, 25-storey tower, with 167 apartments and 180 apartments.

“The start of phase two demonstrates the commitment of Stanhope and Mitsui Fudosan to the delivery of much-needed new housing – including affordable – in Hammersmith & Fulham and our long-term commitment to the area.”

Construction has already started on 142 affordable homes for Peabody in two new buildings called Macfarlane Place at Television Centre. The work is being carried out by Kier and is expected to finish in early 2024.

Managing director of Mitsui Fudosan UK Tomoo Nakamura said: “This announcement underlines our continued commitment to the development of the Television Centre site and the range of opportunities that it offers for the delivery of a number of significant commercial and residential projects.

“We have already completed over half a million square feet of office space, as well as more than 430 homes on the Television Centre site.  We remain focused on ensuring that this development continues to be delivered to the highest standards while we continue to explore other investment opportunities in London.”

The iconic doughnut-shaped BBC Television centre was sold to developer Stanhope in 2012 in a deal worth £200m.