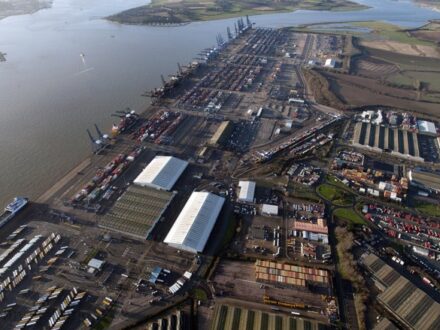 Plans for a green hydrogen plant at Felixstowe Port in Suffolk have seen daylight for the first time.

This week, ScottishPower released plans for a 100MW green-hydrogen production facility at the port, capable of delivering up to 40 tonnes per day – enough to power 1,300 hydrogen trucks.

According to The Guardian, which first broke the story, the development plan is worth £150m.

But a spokesperson for ScottishPower told Construction News the value was not “definitive” due to the project being in its early stages.

They clarified that the total price of the project, which will be built on brownfield land within the port, would be “in the region” of £150m.

ScottishPower is putting together the development plans in tandem with Hutchison Ports, which owns and operates the port. It is part of Hong Kong-based multinational CK Hutchison.

Hydrogen director at ScottishPower Barry Carruthers said the plan would “unlock nationally significant decarbonisation for the region” and play a role in the international market as well.

“It’s perfectly located not far from our existing and future offshore wind farms in the East Anglia region, and demonstrates how renewable electricity and green hydrogen can now start to help to decarbonise road, rail, shipping and industry,” he added.

Local MP for Suffolk Coastal Therese Coffey said: “It’s schemes like this – and investment from industry, as well as government – which are crucial for us to reach net zero by 2050.”

Felixstowe is the biggest container port in the UK, handling more than a third of the country’s imports in total. It is a key gateway for imported construction materials.

Earlier this week, workers at the port confirmed eight days of strikes later this month, following a dispute over pay. They rejected an offer of a £500 lump sum on top of a 7 per cent pay rise.

Construction Products Association deputy chief executive Jeff May warned any strike action would “exacerbate existing strains on the construction supply chain” going into the second half of this year.

Plans for the Suffolk hydrogen plant came after campaigners lodged a legal appeal earlier this week to stop the construction of Sizewell C nuclear power station.