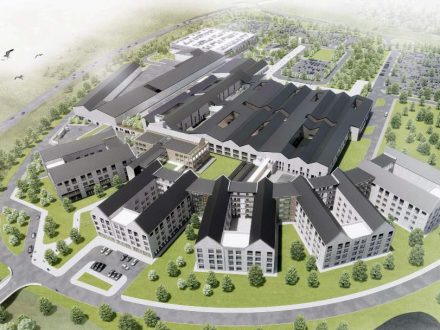 A Scottish NHS Trust has begun searching for a design and delivery partner for a new £500m hospital.

The Monklands Hospital replacement project will see an entirely new facility replace the existing University Hospital Monklands, which, according to NHS Lanarkshire, has exceeded its design life. The new facility in Wester Moffat near Airdrie, aims to meet net-zero carbon standards.

The net-zero vision was first unveiled in November 2021, as part of the COP26 climate summit in Glasgow. When built it will be the first hospital in Scotland to have been designed from the outset to fully meet net-zero climate goals.

The current hospital was said to pose “many operational and financial challenges”, and had been earmarked to be replaced since 2016, when the trust announced that it was looking into either overhauling the building or constructing a new facility.

The contract notice states that the trust may result in “at least” four separate contracts, which could be won by a single contractor or multiple firms.

The contracts are expected to include a pre-construction service agreement, covering the design of the new hospital, an advanced works contract for enabling works, a main building contract and a maintenance contract.

The contract notice mentioned further works, which could be rolled into the new hospital scheme.

It stated: “It is possible that work required to the East Airdrie Link Road could be undertaken by NHS Lanarkshire; if so, this work would also be carried out by the contractor, either as part of the works under the building contract for the main MRP works or under a separate contract.”

Procurement is outlined as following a competitive dialogue procedure with a two-stage design-and-build programme. The trust is expected to shortlist three contractors who will be invited to the next stage of procurement.

The notice states that bidders must have a minimum turnover of £1bn per year to qualify for the new hospital scheme. Once awarded, the contract will run from December 2022 until May 2031. The deadline for interested parties to tender is 13 June.

The new Scottish hospital contract comes after an inquiry into work carried out at hospitals in Glasgow and Edinburgh restarted last week.

The inquiry, which was paused in November 2021, is being chaired by Lord Brodie QC. It will examine issues at the Queen Elizabeth University Hospital (QEUH) in Glasgow, and both the Royal Hospital for Children and Young People (RHCYP) and the Department of Clinical Neurosciences (DCN) in Edinburgh.

Safety concerns about the functioning of the QEUH prompted the inquiry, which was launched in August 2020.