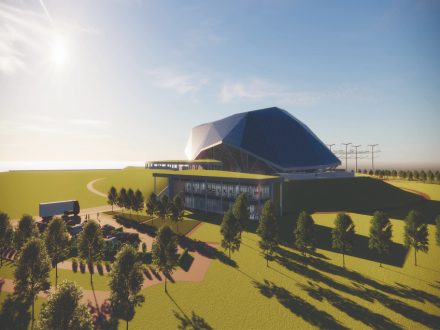 Motor giant Rolls-Royce has published a shortlist of potential locations for the construction of its first factory that will manufacture nuclear power station parts.

Picked from more than 100 submissions from local enterprise partnerships (LEPs) and development agencies, the shortlist of places was selected against a clear set of criteria.

Rolls-Royce is in discussions with the government to build a string of nuclear power stations.

The first factory will be the biggest to be built by the motoring giant, with construction beginning once Rolls-Royce SMR receives the go-ahead to build a fleet of SMRs in the UK.

Two other factories will manufacture civils modules, and mechanical electrical and plumbing (MEP) modules. These will be transported to sites where they will be assembled into nuclear power stations.

These locations will be selected from the full list of submissions, giving all places further opportunities to host a Rolls-Royce SMR factory.

Rolls-Royce SMR chief executive Tom Samson said: “The response was fantastic, and shows the ambition and appetite of the UK to build and operate a fleet of SMRs, which will provide affordable, low-carbon electricity for generations to come.

“The final location will come from the shortlist and will result in significant investment, long-term high-skilled jobs and will support the UK government’s aspirations for levelling up.”

The UK engineering company previously announced plans to complete up to 10 SMRs by 2035, and aims to turn on the first factory by 2029.

SMRs have the potential to be less expensive to build than traditional nuclear power plants because of their smaller size and they have been backed by the government.

Secretary of state for business, energy and industrial strategy Kwasi Kwarteng said: “This is fantastic news for Sunderland, North Yorkshire, Deeside, Lincolnshire and Carlisle, which, if these SMRs go ahead, could be at the forefront of manufacturing components for this British-made tech.

“Backed by £210m, SMRs have the potential to provide quicker and cheaper low-carbon nuclear power, and today’s announcement underlines the potential for new jobs around the country, created by embracing this new technology.”