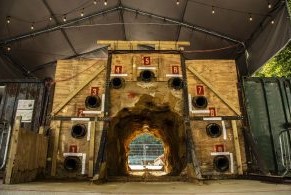 Robots have successfully built a tunnel in a Network Rail test project in southern England.

The 2m-diameter Peak XV tube was created in the company’s research facility with the use of digital twin technology and a fleet of robots.

Part of a Network Rail demonstration scheme, the tunnel was displayed at a conference in London earlier this month.

HyperTunnel said its method was 10 times faster and half the cost of conventional construction, as well as being designed to use sustainable materials.

Robots enter the ground via an arch of HDPE pipes and then 3D-print a tunnel shell, deploying material directly into the ground.

“We are constantly searching for new approaches to enlarging or repairing tunnels that reduce the length of time a tunnel will be closed to trains. Peak XV moves us a step closer to that goal and, crucially, with a method that reduces workforce safety risk.”

HyperTunnel co-chief executive and co-founder Steve Jordan described the demonstration tunnel as a “big step” for the firm and the tunnelling and construction industries.

“While using robots exclusively to build underground structures is dramatically different, the contributing technologies, such as digital twins, robotics, 3D printing and digital underground surveying, supported by artificial intelligence and virtual reality, are all well-proven in other industries,” he added.