Sometimes doing the right thing pays off in ways that could not have been predicted. Such is the case with Merit, the North East-based offsite manufacturing and construction firm. In early 2020, the company moved into a new HQ building on Northumberland Business Park, to the north of Newcastle. The idea was to provide office staff with more space, better amenities and top-notch digital connectivity.

Merit managing director Tony Wells remembers a colleague urging that they get the audiovisual technology right and that the company should be doing more with videoconferencing. “I was like, ‘yeah, okay, that might catch on’,” he says.

And then, of course, the COVID-19 pandemic struck, pitching the country into lockdown. “We had faster broadband and more meeting space. We were basically just set up for it,” says Wells.

“In England and Wales, we didn’t stop working at all. We never had any pauses”

The same was true of Merit’s manufacturing facility down the road. Some of Merit’s sites in Scotland were shut down due to the different government approach north of the border. “But, in England and Wales, we didn’t stop working at all,” says Wells. “We never had any pauses. There was the odd client who was trying to keep people offsite to stop disease spread, but all of our main sites stayed open.”

That, of course, was only possible due to the fact that the vast majority – and, indeed, an ever-increasing majority – of work for Merit’s projects is completed offsite. Both the work and workers required on site are minimal.

“We were in a great situation because our normal workforce levels are about 20 per cent of the traditional level, so it naturally supports social distancing,” says Wells. “We did have to adjust some processes, but we just tweaked it over a few weeks. Yes, there were some productivity reductions in the factory, but, all in all, it was pretty manageable.”

As a result, Merit has emerged stronger than ever from the pandemic and the company’s growth trajectory is nothing if not ambitious. In its 2021/22 financial year, Merit forecasts that it will record turnover of about £60m. In 2022/23, it expects the figure to increase to £200m.

So, apart from its resilience in the face of COVID-19, what is it about Merit’s approach that underpins such rapid growth?

There can be no doubt that Wells is the driving force behind the business. He studied electrical and electronic engineering at Newcastle University before going on to work for British Steel on Teesside, just after the company slashed its workforce from 22,000 to 7,500. Wells has previously stated that his three years at British Steel “shaped me as a person”. 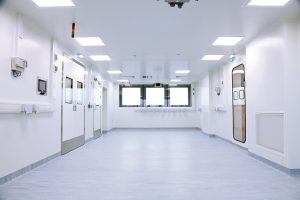 A spell at Fujitsu, which had just opened a new manufacturing facility in Newton Aycliffe, followed before Wells moved to Siemens as facilities manager at its new factory in Newcastle. Wells’ love of research and development (R&D) led him to start a PhD in semiconductor research at Newcastle University – something he never quite completed.

With all that experience under his belt, Wells could have landed a job at another prestigious company and pretty much anywhere in the world. But he wanted to run his own business and loved – still obviously loves – the North East, which led him to take over as managing director at Merit in August 2002.

At that time, Merit was a small pipe-fitting company, turning over about £2m a year. Wells says that after just two weeks at the firm and having studied its accounts in detail, he realised it was within about 10 weeks of becoming insolvent. “We had to make some very rapid changes and lost about a third of the workforce,” he says.

“I remember having a conversation with the operations manager at the time and he said that firing a third of the workforce had saved two-thirds. We then reconstructed the business. We basically repurposed Merit as a self-delivery [business focused on] mechanical pipework and cleanrooms. Within the first year we were [employing] far more people than we were before we started and [were] financially in a much better place.”

Some remarkable wins were to follow. In the early to mid-2000s, Merit bid for and won work on Diamond Light Source, the UK’s national synchrotron, based at the Harwell campus in Oxfordshire. By harnessing the power of electrons to produce bright light, today scientists can use the synchrotron to study anything from fossils to jet engines, viruses and vaccines.

Diamond is now one of the most advanced scientific facilities in the world and its pioneering capabilities are helping to keep the UK at the forefront of scientific research. When Merit bid for contracts on the project, however, it was still a “tiny, little company”, according to Wells, turning over about £5m a year. That it won the contracts and had the wherewithal to deliver them successfully speaks volumes.

“We said, ‘right, we’re going to do it absolutely differently’, and then we accelerated towards an offsite manufactured solution”

“We were doing all these high-tech type things, but still in a relatively traditional way, [albeit] with some offsite manufacturing,” he says. “It was the usual construction Groundhog Day, where people were reinventing the wheel for every project and every project was different.”

As a result, in 2015, Merit decided to rip up its business plan once again. “We wanted to base it around offsite manufacturing; we only wanted to be a tier one provider,” says Wells, adding that by that point he was fed up with the usual issues that plague specialist contractors, not least late payment and having to deal with variations.

“We wanted to go in a completely different direction, although, obviously, when you’ve got an industry and a procurement system that’s geared around [the] status quo, then it’s a harsh situation,” he says. “But, we said, ‘right, we’re going to do it absolutely differently’, and then we accelerated towards an offsite manufactured solution.”

The timing proved fortuitous. In 2015, concerns were first raised about construction giant Carillion’s debt position. After the company experienced financial difficulties in 2017, it went into compulsory liquidation on 15 January 2018, with liabilities of almost £7bn. The implosion proved, if [it] had not already been obvious, that biggest is not always best.

“Carillion going bust was incredibly helpful for us, because before it was ‘bigger is best’, so we never got the larger projects,” says Wells. “People realised that, actually, the biggest was in fact [sometimes] the weakest.” As a result, he adds, Merit went on to pick up some major contracts, and was able to refine its approach and deliver beyond clients’ expectations.

“We got the chance to do what we do typically now, which is to throw away the MEP [mechanical, electrical and plumbing] design and start again from scratch, because that’s the fundamental roadblock to offsite manufacturing,” says Wells. “What we designed was an offsite manufactured product and that went incredibly well. We delivered that in half the time of the traditional [approach].”

He adds: “People could see that offsite manufacturing was faster, more reliable, higher quality and [easier] to maintain. Since then, we’ve rapidly transitioned to a product-based solution. The MEP design is a platform from us. If you’ve got consultant designers, that’s absolutely fine, but we will be throwing that away and we’ll give you the same performance spec. You can have whatever layout you like, more or less any building shape you like, but the infrastructure that goes with it is a Merit-manufactured proprietary product.”

The point, Wells says, is that the construction industry desperately needs to improve productivity. He notes McKinsey research that demonstrates that productivity in construction is roughly where it was at the end of the Second World War, whereas it is 8.5 times higher in manufacturing. Wells is, of course, far from alone in making this observation, but the point is that the company is getting on with fixing the issue.

“Productivity is down, wages in construction are down, diversity is down,” Wells says. “It’s antisocial and nobody wants to sit on site. You end up with a load of all-white male people on site with muddy boots, which is not exactly attractive. And the amount of higher-educated people is only about half of what it is for the national average.”

Wells admits there have been some productivity gains, such as in precast concrete, but the situation in M&E remains dreadful. Merit has carved out a niche for itself in biotech facilities, in which Wells says MEP makes up 50-60 per cent of a project. As a result, the firm has focused remorselessly on improving productivity in that space. 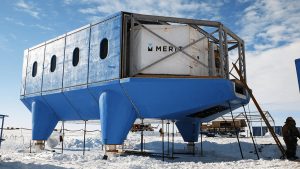 “We look at how we make that into a product,” he says. “We’re vertically integrated. We have our own MEP, made in our own factory to our own design using our own BIM modelling. Nothing is offshored; it’s all made here, and all designed here. Then we wrap a building around it. We design the whole thing and you can have whatever shape you like, and you can have whatever cladding you like.”

The focus on biotech and biomedical facilities was quite deliberate. “If you’re trying to innovate in a completely new direction in construction, you need to go into a place where there’s more margin and less competition,” says Wells. “The plan is that we get to a point where we have such definitively different products that why would you not choose the number one in that market. And then, from that point, we’ll look to related industries, like hospitals.”

Which brings us full circle. The plan to refine Merit’s strategy to allow it to innovate while at the same time maintaining margins and growing the business was drawn up in advance of the pandemic. However, it was the right thing to do, both for Merit and the industry – and with the current boom in biopharmaceutical manufacturing as a result of COVID-19, Wells is confident that Merit will reap the rewards.

Appointed by Piramal Pharma Solutions to deliver a £30m drug-manufacturing facility in Grangemouth.

Selected by Autolus Therapeutics, a clinical-stage biopharmaceutical company, to build a £66m facility in Stevenage for the development of cancer treatments.

Awarded a contract with Northumbria Healthcare NHS Foundation Trust to build a £30m hospital in Berwick.

Secures a £6m contract to build a decontamination centre in south-west London for medical-equipment specialist Steris.