Police escorts and modular bricks: Bam in a tight spot 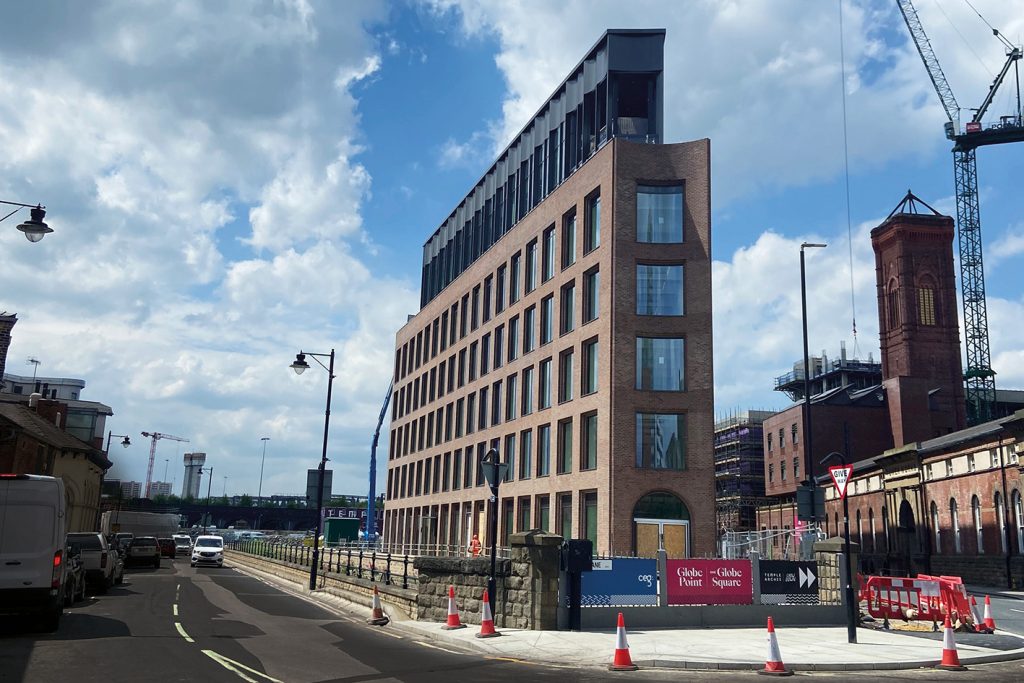 Despite a lengthy delay due to lockdown and the constraints of a very tight site, Bam Construct delivered a new office block in Leeds using innovative methods. Joshua Stein reports.

For a century beginning in the late 1700s, the Holbeck area in Leeds was a world-leading hub for the flax industry. From the 1830s onwards, mill after mill sprung up as demand flourished. Holbeck’s proximity to nearby canals helped raw materials flow in and processed linen thread flow out. The adjacent Hol Beck watercourse provided the water for a steam engine that powered the mill’s machinery.

Nearly 200 years later, Bam Construct and developer CEG have brought another building into the area – a 37,800-square-foot office block called Globe Point. It stands adjacent to the site of Marshall’s Mill, one of the first mills in the area. Globe Point now stands seven floors in height, and sports the same, deep-red brickwork. The building has a steel frame and a brick facade, and sits on the site of former factories built at the height of the city’s industrialisation.

Locked down and penned in

Construction on the project was originally earmarked to start in March 2020. “We had almost mobilised the piling rig to start,” recalls Bam Construct project manager Steve White. But then the COVID-19 pandemic hit, and the project, like so many others up and down the UK, ground to a halt – albeit for longer than most.

In the end, building work began in May 2021 and was wrapped up this summer.

“Worldwide, nobody knew what was going to happen,” CEG regional construction director for the north Tony Armstrong says. “So we took a decision just to take stock until we could see how we might work through it.”

When Construction News visited the triangular site in July, the first thing that was noticed was how penned in it is. Being hemmed in by the Hol Beck on one side and two main roads on others proved one of the first challenges facing Bam and the rest of the team, White says.

At the beginning of the construction phase the crane was put into place, and was then used to build up the site around it. That left a gaping hole where the crane sat and rainwater would come in. Due to COVID pressures and the omicron variant, that issue lasted six weeks longer than the team had originally planned, White says. Bam installed bunds within the building to protect the site from the water, before it was then pumped out.

The pandemic also hit the firm’s ability to recruit the workforce needed to complete the job at Globe Point. That, compounded by Brexit, material price inflation and then the war in Ukraine, left the project “always on the back foot”, he adds.

The location is made even more complex because the site sits next to an old bridge. Transporting the crane and piling rig to and from the site needed a police escort – to ensure the weight limit on the bridge was not surpassed – which had to be booked four weeks in advance.

“It’s a really complicated logistics exercise,” Armstrong says. “You’ve got to organise to get a massive crane big enough to take [another] crane out from a building, accompanied by a police escort on a day that’s not windy, and get it all out over a weekend that does not affect local trade.”

Removal of the piling rig was delayed by three weeks due to the availability of the police escort, leading to “knock-on effects everywhere else,” White says, and the rig had to stay on site for an extra four weeks.

The construction labour crisis also pushed the team at Globe Point to adopt different approaches to building the structure. Rather than employing bricklayers, Bam opted for an offsite approach. It drew in Staffordshire-based manufacturer Thorp Precast to deliver 157 separate precast concrete panels, which were built using around 88,000 bricks. Bricks were cut and bonded to precast backing to form the panels, White says. These varied in size, with the smallest measuring one metre by four metres and the biggest measuring nine metres by nine metres.

For White, a bricklayer by trade, using a precast solution instead of tradespeople was a hard decision to make.

“This is probably helping to drive the labour shortage,” he muses. “I have no bricklayers, so we’ll do it offsite. But the more you do offsite […] it’s probably less work for a bricklayer.”

However, the intricacies of the brickwork meant that there were “literally a handful of bricklayers who had the skill to do it” in the local market, Armstrong says. Relying on those few people would be impossible for a project of its size.

It would also have been a “traditional bricklayer’s nightmare job”, White says. The nose of the building is concave, which would have proven challenging.

“You would never have got the quality we expected,” White says. “Traditional bricklaying just didn’t lend itself to it.”

Thorp’s system, however, meant the demands of the job were efficiently delivered. Moulds for the panels were made of plywood, while each step of the process was completed on a factory line, ensuring quality control.

Using the modular system also brought multiple scheduling, safety and environmental benefits to the scheme, White and Armstrong say. Thorp’s factory does not face the same weather constraints as a traditional bricklayer, whose work is often disrupted by rain – saving time that could have, otherwise, been wasted waiting for the weather to change.

“We were installing four to five panels a day on a good day,” White explains. “We pretty much did the elevation within a fortnight – using scaffolds and bricklayers it would have taken three or four months.”

Taking scaffolds out of the equation also dramatically improved the safety of the site – and only three or four people were needed on site to ensure it was all going smoothly.

“With traditional brickwork, it would have involved 40 or 50 workers,” White says. In addition to that, removing scaffolding meant the whole site was tidier and there were fewer potential hazards.

Decisions over facade materials also led to a reduction in the amount of concrete needed. The project team opted for an ultra-high-strength performance material: ground granulated blast-furnace slag (GGBS) concrete. As a result, the team says, embodied carbon was cut by a third in the panels.

The method also “means you can use a much thinner layer of concrete on the site [panels], which not only gives you more level space within the build-up of the floor plate, but also means the panels are a lot lighter,” White says.

While precast solutions might initially appear much more expensive than traditional building systems, the costs were compared against scaffolding, the workforce and all the transportation needed for the materials. Though the precast solution overall “is still a little bit more expensive”, it “guaranteed the quality” required for the project, White says.

Globe Point sits in the middle of an area that features a great amount of activity. With two huge roads straddling the site, along with an event space, a temporary bar and other developments in the area, it is not ideal for construction. However, the decision to take a modular approach meant that the impact on the surroundings was much smaller than it would have been otherwise, with less dust from the construction process, no scaffolding in sight and fewer vehicles on the road.

That bodes well for the future, as Globe Point was the first of many phases on a £350m lot that, when finished, will eventually consist of up to 1.1 million square feet of offices, shops, cafes, restaurants, bars, a hotel and up to 750 new homes.