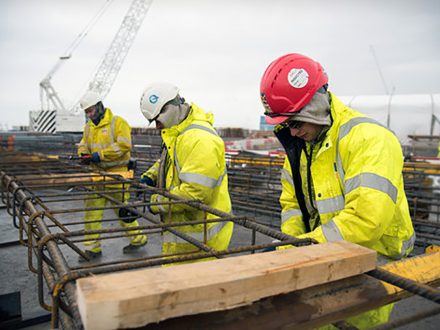 Hinkley Point C workers could be housed at a Pontins holiday camp in Somerset as EDF looks to accommodate thousands of extra staff over the next three years.

This week, French energy giant EDF – the client behind the nuclear power plant – lodged a request for an environmental impact assessment (EIA) screening opinion with Sedgemoor District Council of Brean Potins in Burnham-on-Sea.

The request, first reported by local media sources, was made by Britannia Hotels, the group that owns the holiday park, on behalf of EDF. It would see a change of use for the site from tourist accommodation to extended housing for site workers.

It has been pitched as a temporary solution to accommodate thousands of additional workers that would run from November this year for three years. Thereafter the site would revert to its original use.

The screening document, which will be seen by authorities such as Natural England, Highways or the Environment Agency to gauge the environmental impact of the housing plan, said the holiday park would be used in its existing capacity, with some renovations before workers move in.

A total of 600 chalets are on the park, alongside a leisure complex, swimming pool and shop, as well as a car park and green spaces. EDF is reported to be in talks with Britannia Hotels, which has in turn proposed a modernisation of the chalet units, improvements to electrical supply, wifi connectivity and infrastructure.

“Improvements will be made to the site and the facilities prior to the use by HPC workers, and as such will seek to create a positive legacy when the holiday park reverts to general tourist use,” the cover letter said.

EDF’s senior manager for community relations, Andrew Cockcroft, said: “As Hinkley Point C’s workforce increases, we are actively exploring a wide range of options for additional accommodation. We will work closely with the local community around any new accommodation site as our plans develop in the months ahead.”

In April it was reported that the nuclear power project was struggling to accommodate workers as it required 3,000 more people to carry out work than initially planned. The total expected labour force during peak construction has risen to 8,500 from 5,600.

The project is now estimated to finish in June 2027.