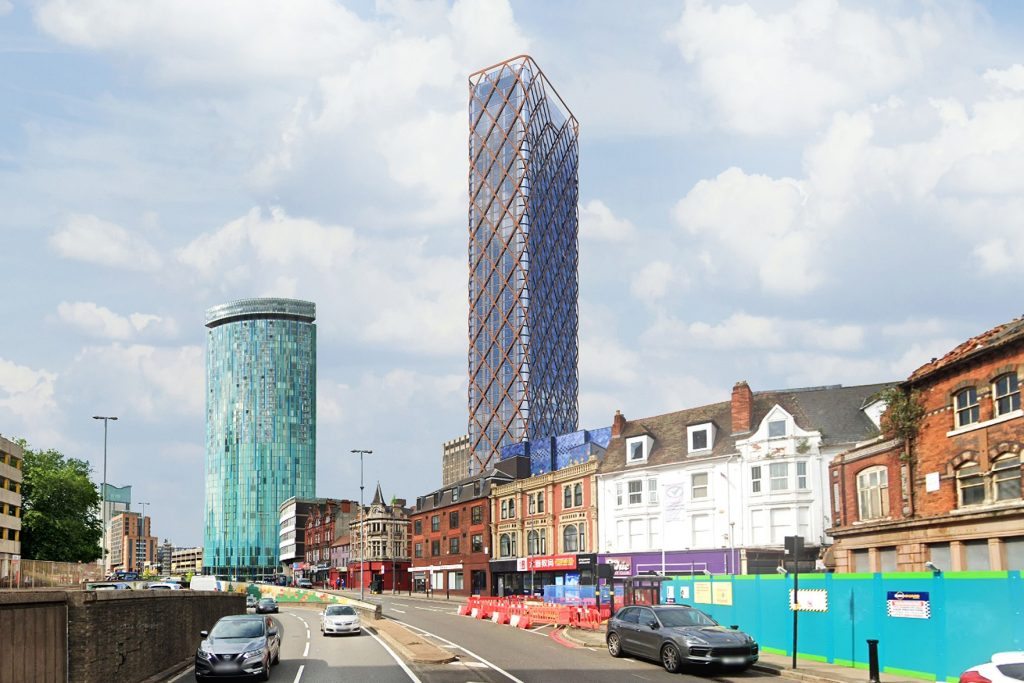 Developer Cordia Blackswan has submitted plans for a 50-storey residential tower in the heart of Birmingham.

The application, handed into the city council this month, would see 487 rental homes created within a 170-metre-tall “vertical village” close to New Street station.

The site at 17 Thorp Street sits between the 47-storey Beetham Tower and events venue the Birmingham Hippodrome in the Midlands city’s Southside district.

Existing buildings on the plot would be demolished under plans drawn up by architects K4. The new tower would be known as Act One.

As well as the homes, the tower would feature a range of resident facilities, including wellbeing and leisure space, cycle parking and a reception. A restaurant and bar would also be included, along with a sky garden and public-realm improvements.

The project aims to create a “unique place and quality of experience” for occupants, according to the planning documents. Birmingham-based Cordia Blackswan said it intends to give a “new sense of purpose to a somewhat neglected part of the city”. The developer claims the tower would help build a community among the cultural buildings of the area, as well as boosting the local economy.

Cordia Blackswan managing director Marcus Hawley said: “We want to develop a public realm and site that brings significant social and economic benefits to the city and contributes to the council’s future vision. Act One will take the traditional build-to-rent model to new heights in terms of quality, the level of facilities, and the opportunity for interaction and engagement between residents.”

Elsewhere in the city, a joint venture of Argent and Federated Hermes is planning the 49-storey Octagon tower within the £700m Paradise Birmingham development. This would be taller than the city’s current highest point, the 152-metre BT Tower, although both are set to be dwarfed by a 61-level skyscraper approved for 100 Broad Street.

Meanwhile, plans emerged this month to turn a site in Birmingham previously earmarked for a Commonwealth Games athletes’ village into a shipping-container events park.