Plans go in for £99m Warrington mixed use scheme 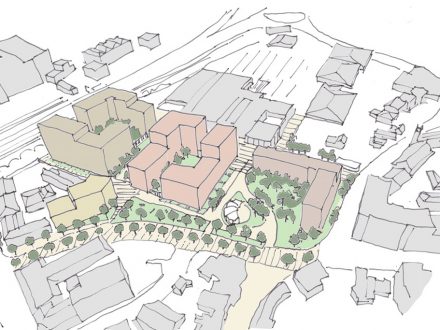 Plans have been submitted for a £99.1m mixed use scheme in Warrington, which includes 900 residential homes, a hotel, an underground car park and commercial and retail space.

The application was made by Cockhedge Property Unit Trust alongside Warrington & Co, which is the regeneration arm of Warrington Borough Council.  The site is located 20 miles from both Manchester and Liverpool.

The proposal involves the demolition of the current Cockhedge Shopping Park and the council office building called New Town House. The council building was constructed in the 1970s in brutalist style and was considered “an eye sore” by many, the planning documents add.

Construction plans include building six apartment blocks, each connected with public realm spaces like terraces and courtyards. The apartment buildings would vary in height from 5 storeys to 13 storeys. The 2.72 hectare site would be redeveloped to include 20,000 square metres of commercial space and 1,000 square metres of retail.

It is expected that the regeneration project will create 158 construction jobs over its 10-year build period. A further 199 jobs are expected along the supply chain and as a result of offsite work. Should Warrington Borough Council approve the outline, the project will be delivered in phases, and a planning application for enabling works will follow.

The scheme was also pitched as one that was in line with Warrington’s Town Centre Masterplan which is a council-led project to transform the town centre’s high streets and make best use of the spaces around the parklands and the river.

In 2021, a £56m town centre project in Warrington by the now-sunken firm Nobles Construction was stalled. Last week, Manchester City Council recommended a £741m development scheme with 1,950 homes for approval.