The precast factories for HS2’s Colne Valley Viaduct and the Chiltern Tunnel are responsible for some of the most ambitious prefabrication works ever attempted in the UK. Joshua Stein reports

It may account for only a small sliver of the enormous HS2 megaproject, but the southern portal site to the west of London is possibly the most expansive currently working on the £107bn rail-construction scheme.

The task at hand is to construct the 3.4km Colne Valley Viaduct – set to become the longest railway bridge in the UK – and the 10km, twin-bore Chiltern Tunnel, the longest excavation on the HS2 route. Both of these mammoth tasks have been cut into manageable chunks through the use of prefabrication, resulting in two of the biggest offsite manufacturing projects yet tackled in the UK.

The Align joint venture – comprising Bouygues Travaux Publics, Sir Robert McAlpine and VolkerFitzpatrick – holds the £965m contract for this section of the route, the Central 1 (C1) package of HS2 Phase 1.

Align commissioned steelwork specialist Caunton Engineering to build two factories; one to prefabricate tunnel segments and the other to churn out slices of viaduct.

About 2,000 people are employed across Align’s sites, the majority at Hillingdon, and they were hard at work when Construction News visited in early April. The site has the self-contained feel of a university campus, complete with halls of residence.

Workers who live beyond commuting distance have the option to stay overnight for a few days at a time in the ‘Snooze Box’, a purpose-built, onsite hotel, which was recently expanded to 160 rooms. CN did not spend the night, so can only speculate on the creature comforts on offer.

On a big scale

The extent of the workforce matches the scale of the endeavour. The 3.4km viaduct is set to become the longest railway bridge in the UK, but not the straightest. Its route straddles a series of lakes and waterways in a sweeping curve, meaning that each of the 1,000 segments used in its construction has a unique shape.

Fabricating so many one-off concrete pieces, each weighing 60-140 tonnes, certainly poses a challenge, says placement site manager Seb Lewis, who is employed by Align member Bouygues Travaux Publics. “The main factors for variation between segments are the height of the segments and also the angle on the bottom slab,” he says outside the factory.

“We place the formwork for the next segment up against the cage [of the previous one], so that the new one will [bear] against it”

To ensure the segments fit together perfectly, the previously made segment is used in the manufacturing process of the current one. “We place the formwork for the next segment up against the cage [of the previous one], so that the new one will [bear] against it,” Lewis says. “In case there are any issues with the finished face of the segment, it can then be counteracted with the next segment, as it is matched against it.”

Precast segments are lined up outside the factory in their hundreds on the day of CN’s visit. Align expects to begin fitting them together in the summer. A short walk away, in the tunnel’s precast factory, there are variations to grapple with as the segments are produced.

“The reason why some have a ring rebar in addition to the steel fibre is because they have been designed for specific areas of the tunnel, such as cross-passages or shafts,” says Align senior tunnel precast engineer Marcos Roman. Given the varying requirements, digital techniques are being used to ensure that each segment is fashioned correctly.

The casting process at the factory involves a 10-stage carousel, with each stage taking 11 minutes. A manager needs to press a button to indicate the work has been done to the right standard before the whole carousel can advance to the next step. The process runs continuously, 24 hours a day, five days a week, to maximise output. From the first stage of the production process each segment is fitted with a barcode, so Align can track when the work has been done on each piece and assign where each piece is due to be placed in the finished structure.

“It tells you what stage the segment’s production is at, when the segment has been produced, and you will be able to monitor any deterioration or need for restrengthening, which comes later, once the tunnel has been developed, by using the barcode. That removes the need for paperwork and makes the details of every single segment easily accessible,” says Roman.

The same digital model and barcodes enable each piece to be tracked during fabrication and after the tunnel is complete. Once they emerge from the carousel, segments are kept inside the factory for 24 hours to avoid the risk of surface cracking due to temperature changes as the concrete cures. They are then stored outside for 14 days to gain full strength, although the supply of segments standing at the factory is currently enough for the next two to three months of tunnelling work. The intent, says Roman, is to avoid any possible slowdown of work once it begins.

As HS2 and the construction sector as a whole ramp up their work in the wake of the pandemic, they share a common byword: productivity. Efforts are continually being made to improve productivity across the precasting processes. At the viaduct factory, a transfer cart is used to support segments as they emerge, reducing the strain placed on them, says Lewis. This allows them to be moved earlier in the curing process, saving time overall. 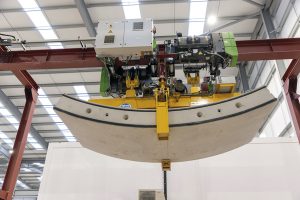 Segments have been designed for specific areas of the tunnel

“By using the transfer cart, we only have to wait for the concrete to reach 12 megapascals [in compressive strength], rather than 36 megapascals, so this triples the productivity rate when it comes to developing the segments,” Lewis explains.

On top of that, the casting schedule has been designed so that no time is wasted waiting for the concrete to set. “We pour on a night shift at 4pm or 5pm. So, by the time the guys on the day shift come in, in the morning at 7am or 8am, that concrete has reached the required strength,” he says.

At the tunnel factory, efficiency is boosted by speeding up the curing process with heat. At the final stage of production, each segment is baked at 45 degrees centigrade and 80 per cent humidity. That combination has been found to speed up the process of concrete strengthening, so curing, which would normally take 24 hours at ambient temperatures, can be accelerated to just five or six hours.

“There are multiple benefits here to the process,” says Roman. “You save a lot of time finishing up each segment and you also do not have to worry about weather conditions, as the whole process is done inside the factory.”

Safety is “a big focus”

Many safety risks present on the construction site can be swept away using automation. Roman says the precast tunnel factory is 95 per cent automated, which removes a host of safety issues. Removing the need for manual intervention as far as possible yields a safer and better workplace for everyone, he adds.

Roman explains that as each segment goes through 10 separate stages, conventional precast methods would require a lid to be manually placed on top of each mould at every stage.

“The problem is that these give you some ergonomic and safety issues,” he says. “You need to manually lift the lids all the time, you need to clean the lids, and that might create an issue with dust, especially during cleaning activities. What we have done is we have completely removed the lids from the carousel and we have installed an automatic lid system.

“The automatic lid is designed to be of a universal shape, which will not change the shape of the segment itself but fills the same requirement. Just by clicking a few buttons, the carousel operator can manage everything, and wash or dismantle the lid, so we remove any ergonomic issues or any safety issues from the line.”

Similarly, at the viaduct factory, minimising working from height is a “key focus”, Lewis says. According to the Health and Safety Executive (HSE), falls from height are still the biggest cause of accidents in construction. “In the long term we are planning to have no MEWPs [mobile elevating work platforms],” he adds.

For now, by using a dowel lifting system and a 140-tonne branch crane to lift the pre-cast segments, operatives no longer need to work at height on top of the segments themselves, minimising the danger to workers.

Thinking of the community

The engineering behind HS2 may be impressive and the Colne Valley Viaduct will represent an outstanding feat of construction, but it remains a bone of contention that people living in the area will not benefit directly from the rail line when it opens – no new station is planned in the vicinity. 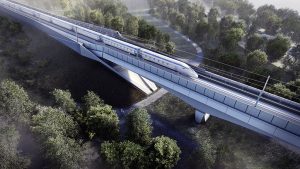 The use of prefabrication factories onsite has dramatically reduced the need for heavy lorries on local roads, minimising the effect on local communities. As Roman says: “Everything for this project is done in-house, the idea being that it does not affect the wider communities.”

The tunnel job is creating a fair amount of waste, much of it chalk, which is being dug up in the building process. This will be used on the site to create a 90ha slope, open to the public, made up of grassland and woodland. Before the job began, the site was farmland.

The idea, says Align head of communications Rob Hutchison, is that no-one will notice how much work was done onsite. “We want people to travel across the viaduct on the train and notice the beauty of the area, and not the fact that we were once at work here,” he adds.