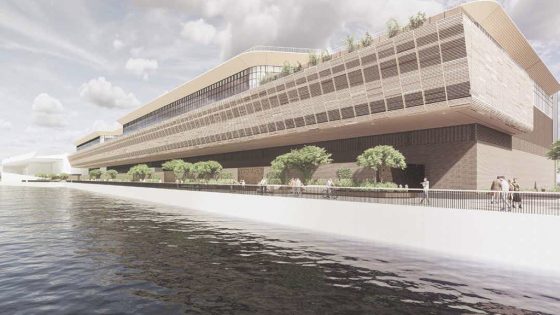 McLaren Construction has replaced Sir Robert McAlpine to complete the £200m expansion of the ExCeL Centre in London’s Docklands.

The scheme will see the existing conference, exhibition and catering facilities extended by a quarter to cover an area of 125,000 square metres.

McLaren will take over from Sir Robert McAlpine, which carried out work in the first phase of the expansion.

The plan will provide 12,000 square metres of exhibition space on the ground floor as well as enhanced convention, meeting and catering facilities on the upper level.

The scheme will also see improvements to the public realm, including new greenery along the dock edge, improved landscaping for pedestrians and cyclists, and a new pocket park.

McLaren will be working alongside companies that have already delivered the design and enabling-works phase of the project, including Gardiner & Theobald, Grimshaw Architects, Hoare Lea and CampbellReith.

ExCeL London said the expansion would enhance the venue’s status as a global leader in the exhibition and convention centre market, creating a landmark building at the eastern gateway of the campus and ensuring the venue continued to contribute to the economy, locally and across the capital.

Jeremy Rees, chief executive of ExCeL London, said McLaren would be a welcome addition to the project-delivery team in January.

“Having completed the first phase of our expansion project on time, we are looking forward to heading into the main construction phase with an experienced and sector-leading project team,” he said.

McLaren’s group managing director, Paul Heather, who joined from Sir Robert McAlpine earlier this year, said the company had the experience to bring forward a world-class project on the scale of the Docklands venue.

“Our team of experts have the skills and sector knowledge to deliver agile solutions, focused upon delivering design, sustainability, technology and programme solutions, that will add value to ExCeL London, ensuring its position as a world-class venue,” he said.

The firm has recently landed a number of major projects, including a £73m warehouse job in Yorkshire.

A spokesperson for Sir Robert McAlpine confirmed that the company would not be involved in the next phase of work at the venue.

“We wish the client and their contractor all the best for the remainder of the project,” he said.

ExCeL attracts about 4 million visitors to the 400 events it hosts each year, including the all-electric Formula E motorsport championship and Jurassic World: The Exhibition, as well as major medical congresses and trade exhibitions.