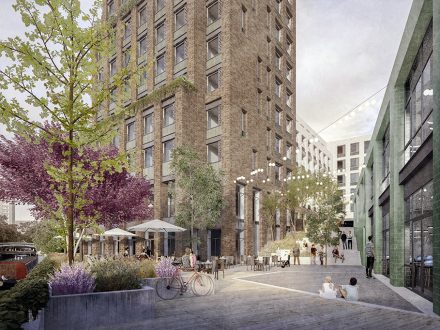 Northern Ireland contractor McAleer & Rushe has won a £50m contract on a £140m co-living and hotel scheme being built next to the Grand Union Canal in Westminster.

The scheme, which is being developed by Cheyne Capital, will see 332 co-living rooms built on the site of the former London Taxi Drivers’ Association headquarters, as well as a wellbeing centre, a swimming pool and a cinema.

A 1,000-square-metre workspace specifically designed for SMEs and start-ups has been included in the designs, with a fifth of it capped at affordable rents to encourage community-led projects and creative industries on to the site.

The scheme will support the socioeconomic regeneration of the area and includes a number of significant public realm enhancements, such as a new piazza, which will enable public access to this part of the waterside, forming a new dining and community-focused destination.

The building has been designed to achieve a BREEAM Excellent rating and will vary in scale from three to 12 storeys in height, according to Cheyne Capital.

Contracts director at McAleer & Rushe Mark Elliott said: “We are delighted to have won another significant contract in London, with this development complementing the exemplary work of our team on other major projects, including Mount Pleasant and Wandsworth, further reinforcing our growing footprint in the city.

“This community-focused scheme will have a transformative impact on the local area through the social value it will add, with its dedicated community space and the economic value it will generate via the allocation of affordable, small business hub workspace.

Cheyne Capital development manager Jack Greenhalf said: “We have selected McAleer & Rushe to help deliver this project because of their expertise in delivering high-quality, creative projects in Central London. Their commitment to building sustainably is aligned with our own values and we look forward to seeing this project come to life during the build phase.”

In May, McAleer & Rushe saw its revenue break through the £400m barrier as it reported financial results for the year ending December 2021 and predicted its turnover would grow to about £425m over that year.