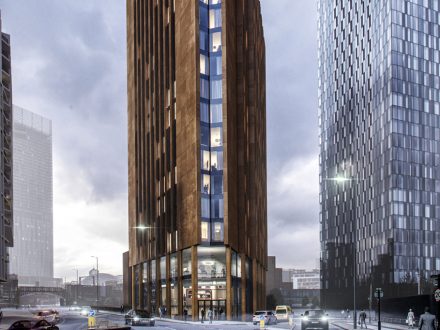 A £40m student accommodation tower in Manchester has been given the go-ahead, a year after it was refused planning permission.

The 28-storey student block project called Deansgate South was approved in a decision by planning inspector John Braithwaite, who was appointed to look into the appeal by the government.

The triangular building, to be delivered by student housing specialist Fusion Group, will accommodate 534 students, and also include a gym, communal study areas, a rooftop terrace, and other utility and recreational areas.

In February 2021, Manchester City Council rejected the application because the developer had not demonstrated a sufficient need for a student block in the area.

Further, the council deemed that the building design “created a feeling of overcrowdedness”. It was also criticised for the plan to use “poor-quality cladding materials”, and because it would have a negative impact on the wind environment and listed buildings.

However, in a decision delivered this week, the planning inspector said the council had contradicted its own targets for purpose-built student accommodation in the area. The annual increase in such housing was 500 bed spaces, but the council had said there was a need for this to reach 660 by at least 2030.

He also concluded that the build would not harm any of the heritage and listing sites in the area.

On the use of the cladding material, corten steel, the inspector said the material, which fades to a reddish hue, was fitting.

He said: “It is claimed that this colour reflects a traditional building material of the area – red brick – and that the material recalls a time when steelmaking was a local industry.” He added that it was more relevant that the material was durable, high-quality and easy to maintain as well.

Deansgate South will be built next to the recently approved £370m twin towers by Renaker.