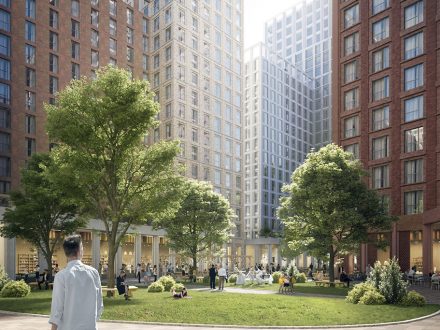 Manchester-based developer Cole Waterhouse has formed a joint venture with Tonia Investments to build more than 1,000 apartments at a prime site in Leeds city centre.

The JV has acquired a 3.8-acre brownfield site known as Leeds City Village, close to the cultural district of Quarry Hill. A total of 1,012 apartments will be built across five blocks on the site, which is bound by Marsh Lane to the west and Shannon Street to the North.

Tonia Investments has provided financial backing for the build-to-rent scheme, whose towers currently stand at between 12 and 22 storeys in height.

The scheme, which only gained planning consent in March, is set to undergo a number of design changes, with the developers consulting Leeds City Council on “enhancements to the residential offering and public realm space”. The revised plans will be submitted in due course.

Commenting on the plans, Cole Waterhouse chief executive Damian Flood said: “We seek to build developments where place-making is central to the design to help deliver places that are desirable destinations, as well as great places to live.”

Tonia Investment principal Charlie Qian added: “Tonia is excited to work with Cole Waterhouse. We hope the delivery of this impressive scheme will add to the continued expansion of the City eastwards. It will provide an acre of new public realm that we hope will complement the success of the neighbouring cultural quarter.”

The new scheme will be built on the site of Leeds’ first train station, built in 1834.

According to Cole Waterhouse, the planning revisions include adjusting the balance of studio apartments to larger one-bed apartments, as well as providing a sharper focus on the communal areas and overall scheme design.

Flood added: “We’re really excited to be working in Leeds at a time when it is undergoing a significant period of transformation and we will be appointing a primarily Yorkshire-based team to deliver the project over the next six years. We will be submitting the revised planning application by the end of 2022, with the intention to start on site as soon as planning is granted.”